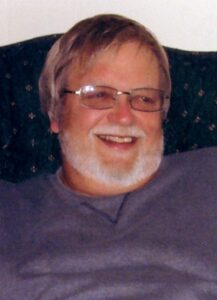 Barry Stay, 67, passed away in his home on April 13, 2019, with his loving partner Marcia and sister Linda by his side. Born in London, England on August 26, 1951, Barry was the son of Robert William and Ivy Grace (Sier) Stay. He joined his two sisters, Linda and Bonita. Barry spent most of his childhood in Plymouth, attending Plymouth schools and graduating in 1971. Barry enjoyed his time as being a true character and making people laugh. He was an production worker for Delmonte, retiring after 40 years. Barry was an avid and accomplished golfer and enjoyed his time on the green. In his youth Barry played baseball and basketball, then softball league and bowling league as an adult. One of Barrysâ€™ favorite activities was bicycling through Amish country with Marcia by his side. Marcia and Barry adopted a favored four-legged friend, Sammi the bulldog. He was an avid Notre Dame and Green Bay Packers fan, spending quality time cheering them on. Barry was always on the hunt for Sasquatch and will continue his search from Heaven. Leaving to treasure his memories are his longtime best friend and partner Marcia Cook of Plymouth; Sammi the bulldog; his sister Linda Wright of Hartselle, AL; his niece Erica Vaughn of Cartersville, GA and nephew James Fetherolf of Euharlee, GA; many friends and other family members. Preceded in death by his parents and his sister Bonita Stay.
Family and friends will gather on Thursday, April 18, 2019, from 5 – 8 p.m. in the Johnson-Danielson Funeral Home, 1100 N. Michigan St., Plymouth. Visitation will continue Friday at 11 a.m. until the service at 12 noon all at Johnson-Danielson Funeral Home. Burial will be private at the New Oak Hill Cemetery.
Memorial contributions can be made in Barryâ€™s name to the Humane Society of Marshall Co, PO Box 22, Plymouth, IN 46563 or to the Rees Theatre Project C/O Marshall County Community Foundation 2701 N Michigan St, Plymouth, IN 46563