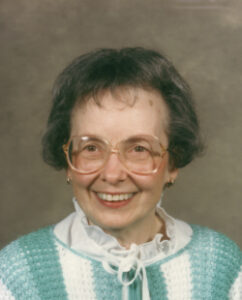 Beatrice (Bee) E. Faulkner (Steiner), a Plymouth resident for most of her life, living the last five years in Niles, Michigan, died peacefully of natural causes on December 31, 2009 at her daughter’s home in Niles, Michigan. Beatrice was 90 years old.
Bee was born in Plymouth on October 18, 1919, the daughter of Harold M. and Flora Etta (Railsback) Steiner. She attended Plymouth High School, graduating in 1937.
During World War II, Bee married Charles White, also of Plymouth. The brief marriage ended suddenly with Charles’ tragic death.
On November 23, 1946, Bee and Dale E. Faulkner were married in Plymouth. They were married for 46 years.
A wonderful homemaker and loving mother and grandmother, Bee also worked as a cashier for ten years at JC Penney in Plymouth, retiring in 1947.
Bee is survived by a daughter, Mary Ann (Walter) McLaughlin of Niles, Michigan, and by two grandchildren, Michael R. (Meighan) McLaughlin and Erin H. M. (Anthony) Rizzo.
She is also survived by one sister and one brother. They are Julia (Richey) Whitesell, of Rotonda West, Florida and Russell E. Steiner of Bartow, Florida.
Bee was preceded in death by her parents, two husbands, a son, Robert D. Faulkner, two sisters and three brothers. Friends are invited to celebrate Bee’s life with her family on Tuesday, January 5, 2010, from 4 to 8 p.m. at the Johnson-Danielson Funeral Home, 1100 N. Michigan St., Plymouth.
Funeral services for Bee will be held on Wednesday, January 6, 2010 at 11:00 a.m. at the funeral home.
Burial will be in the Sandridge Cemetery, Bourbon, Indiana.
Memorials in Bee’s memory may be made to Hospice at Home, Inc., 4017 Chamberlain Rd., Buchanan, MI 49107