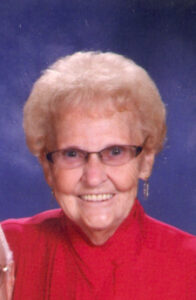 Beatrice M. Klingerman , a lifetime area resident, died at 6:47 p.m. on Tuesday, May 1, 2012 in her home on 4B Road, surrounded by her family.
The daughter of Russell and Helen Killian DeLanghe, Bea was born May 8, 1931 in Lakeville, Indiana. She attended Lakeville School.
On July 8,1948, Bea and Dale D. Klingerman were married by her uncle, Rev. Richard Killian at his parsonage in Whiting, Indiana.
Bea had worked for many years at Ristance in both Bremen and Argos, retiring from the Argos Facility. She was also co-owner of the Saddle Shop in Bremen with her husband Dale. An avid reader, Bea also enjoyed working in her flower beds, watching the Humming birds, spending time in her swimming pool and watching NBA games on television.
Bea is survived by her husband, Dale, a son: James (Traci) Klingerman of Walkerton; three daughters: Marsha Paul of Argos, Krista (Charles) Klockow and Sheryl (Dan) Keyser both of Bremen, 14 grandchildren and 10 great grandchildren. A sister, Judy Haas of Lakeville and a brother, Clifford (Janis) DeLanghe of Plymouth also survive.
She was preceded in death by her parents; a brother, Donald DeLanghe; a grandson, Troy Klingerman and two son-in-laws: Gunnery Sgt. Edward F. Paul and Mark Evans.
Friends are invited to visit with Bea’s family from 3 to 7 p.m. on Sunday, May 6, 2012, at the Johnson-Danielson Funeral Home, 1100 N. Michigan St. Plymouth and on Monday, one hour prior to services at the church.
Funeral Services, conducted by Rev. Ed Friberg and Rev. John Perkinson, will be held at 11 a.m. on Monday, May 7, 2012, at the Plymouth Wesleyan Church, 11203 S. Michigan Road, Plymouth.
Burial will be in New Oakhill Cemetery, Plymouth.
Memorials in Bea’s memory may be made to the Center for Hospice Care, Plymouth Wesleyan Church or Shiloh Wesleyan Church.