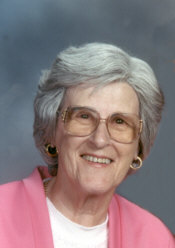 Beaulah Louise Neidlinger, 76, of 9712 King Road, Plymouth, died on Sunday, June 6, 2004, at 3:59 a.m. in the Hospice House of St. Joseph County. Beaulah died following a 10 year battle with cancer, that she bravely fought with the support of her family.
Born on April 15, 1928, in Kings, Ill., Beaulah was the daughter of Rolland L. and Helen M. Burns Fraley. She graduated from the Stillman Valley High School in 1946.
On June 23, 1950, in Kings, Ill., Beaulah and Dale L. Neidlinger were married.
She was a homemaker and a helpmate with Dale in their family farming operation.
She enjoyed vegetable and flower gardening, mowing the yard and above all caring for her grandchildren and watching their many sporting activities. She and Dale have traveled extensively in their motor home.
Beaulah was musically talented and enjoyed playing the omni-chord, a string instrument and also the organ. She was a member of the Plymouth Church of the Brethren for over 50 years.
Dale, her spouse of almost 54 years survives with their four children and families.
They are: Alan L. and Barbara Neidlinger, Michael W. and Paula Neidlinger, Brenda G. and Marty Uceny and Stuart J. and Melissa Neidlinger, all of Plymouth.
Her nine grandchildren are; Megan, Daniel, Alyson, Nicholas, Matthew, Morgan, Alex, Trisha and Trevor. Two sisters Ethel DeVore of Oregon, Ill. and Phyllis Tedrick of Winnebago, Ill. also survive with numerous nieces and nephews.
She was preceded in death by her parents, three brothers and two sisters.
Friends will be welcomed by Beaulah’s family from 4 to 8 p.m. on Tuesday, June 8, 2004, at the Johnson-Danielson Funeral Home, 1100 N. Michigan St., Plymouth, and for one hour prior to services in the church.
The Rev. David Kerkove, pastor of the Church of the Brethren, 1130 N. Michigan St., Plymouth, will officiate at funeral services at 11 a.m. on Wednesday, June 9, 2004 in the church.
Interment will be in New Oakhill Cemetery, Plymouth.
Memorial gifts in memory of Beaulah may be made to Hospice of St. Joseph or Marshall Counties.