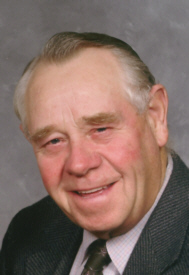 Bernard Bertels-Boener, beloved husband, father, grandfather, great grandfather, uncle, brother, and friend died June 27, 2009, at the age of 74 due to natural causes, surrounded by his family. Bernard was born in Roxel, Germany on February 16, 1935 to Heinrich and Antonia (Willege) Bertels-Böner. Bernard was preceded in death by his sister Maria Peter, and survived by his brother Heinrich Böner (spouse Charlotte) of Roxel, Germany and sisters Antonia Böse-Lotte (spouse Antonius) of Lippetal, Germany and Agnes Holtken (spouse of Bernhard) of Dülmen, Germany. Bernie immigrated to the Plymouth area in 1956 where he farmed for fifty-one years. Bernie served in the National Guard in 1956, where two of his friends, Gunderson and Dingus, taught him English. He also worked at Ancilla’s farm where he met his wife, Mary Elizabeth Glose. They were married at St. Michael Catholic Church on February 15, 1958. A perpetually hard worker, Bernie also worked for many years at Young Door.
During their fifty-one year marriage, Bernie and Mary welcomed seven children in to their lives: John and spouse Marcella (Pesak) Boener, Mike and spouse Cindy (Henson) Boener, Richard and spouse Diane (Atwell) Boener, Joseph and spouse Mary (Flynn) Boener, Pauline Boener and spouse David Richardson, Larry and spouse Elizabeth (Hanks) Boener, and Heidi. These unions of marriage have brought thirteen grand children and eight great-grand children: Zach, spouse Leslie, and children Zach, Anastasia, and Noel Hutchings; Heather, spouse Mike, and children Myah, and Michael Tatay; Crystal Hutchings; Ben, spouse Emily, and children Carter, Ben and Madeline Hutchings; John Boener; Stephen and Anthony Boener; Karas and Kassidy Boener; Katherine and Ellen Boener; and Geoffrey and Erik Boener.
Known as “Opa” to his grandchildren, he loved traveling, spending time with his family and working his farm.
In lieu of flowers, memorial contributions may be made to St. Michael Parish, 612 N. Walnut St. Plymouth, Indiana 46563 and/or Center for Hospice, 112 S. Center St., Suite C, Plymouth, Indiana 46563.
Visitation will be held on Wednesday July 1st at Johnson-Danielson Funeral Home, 1100 N. Michigan Street from 4 – 8 p.m. with the Rosary at 7:30 p.m.
The Mass of Resurrection will be held at 10 a.m. Thursday, July 2nd at St. Michael Roman Catholic Church, 615 N. Center St., Plymouth where Bernie was a longtime member.
The Rev. Fr. William Kummer will celebrate the Mass.
Interment will follow in St. Michael Cemetery, Oak Road, Plymouth.