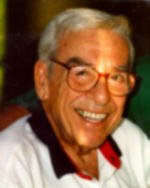 Bernard A. “Barney” Bannon, 76, a former resident of Culver, Warsaw and South Bend, died at 10:14 p.m. on Wednesday, May 1, 2002 , at his residence, 14713 Acorn St. , Plymouth , where he had lived for the past 12 years. Barney had been ill with a cancer related illness. He was born on Sept. 7, 1925 , in South Bend , Ind. , the son of John M. and Margaret L. Holycross Bannon. A graduate of South Bend Central High School ’s Class of 1943, he graduated with a business degree from the University of Notre Dame in 1949. Barney was proud to display his Indiana license plates, ND 49 and Irish 49. Barney served in the United States Navy during World War II. On Nov. 4, 1989 , in Plymouth , he and Nancy J. Gullans were married. For 18 years, he was a sales representative of the Continental Research Corp. of St. Louis , Mo. He loved his company and, at the time of his death, had not yet retired. He enjoyed playing golf and following Notre Dame anything. Especially football. He attended all home games. At his home, he took great care of the yard and had a lovely flower garden. A former member of the Knights of Columbus, Barney was a member of St. Michael’s Roman Catholic Church, Plymouth . He is survived by his wife, Nancy, and by his two sons, a daughter, four grandsons, and a granddaughter. His sons are Patrick J. Bannon, Plymouth and his son, Delaney; Terry and Roxanne Bannon and their sons, Mackin and Riley, Warsaw , and Nancy Ann Bannon, Tucson , Ariz. and her children, Sean and Rory Hardy. In addition two step-daughters and a step-son and their children survive. They are Deborah and Don Smith and children; Brandon, Christopher and Jennifer Jackson and Angela Smith, all of Mattawan, Mich.; Teresa and Clint Graham and children, Jason and Justin Buchtel, Chandler, Ariz., and James R. Campbell, Tempe, Ariz. A sister, Loretta Planck, South Bend , also survives. Barney was preceded in death by his parents, two brothers, John and Mark Bannon and a sister, Patricia Jordon. A Memorial Mass of the Resurrection will be held at 1:30 p.m. Saturday, May 4, 2002, at St. Michael’s Roman Catholic Church, 612 N. Center St . Father Anthony Gillespie will officiate. Interment will be in South Bend , Ind. A time of sharing with family and friends will immediately follow services at the Christo’s Banquet Center , Plymouth . There will be no formal visitation. Johnson-Danielson Funeral Home, 1100 N. Michigan St., Plymouth, is in charge of arrangements. Memorial gifts, in lieu of flowers, may be made to the American Red Cross, the American Cancer Association or to a charity of the donor’s choice.