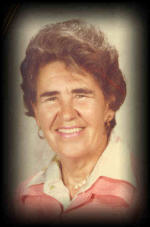 Bernice A. Books, a lifetime Marshall County resident, residing at Lot 74, 805 E. Baker St. since 1991, died unexpectedly at 1:50 p.m. on Friday, December 20, 2002 . She died in Memorial Hospital, South Bend , from complications of a fall at her home last Tuesday. An attentive and loving wife, mother and grandmother, she was 84 years old. Born in West Township on November 23, 1918 , Bernice was the daughter of Glen E. and Cleta M. Morlock Smith. She graduated from West High School in the Class of 1937. On August 1, 1948, in Plymouth, she and Fremont P. Books were married. Bernice had worked as a dental technician, then entered nursing at the Kelly Nursing Home in Argos and continued as a practical nurse at other locations. During W.W. II she was a radio tester for Meck Industries of Plymouth . Bernice and her husband were a team. Co-owners of the B&B (Bernice and Books or Books and Bernice, depending on who you were talking to) Antique shops, they did a thriving business in buildings they constructed at 1000 and 1004 West Jefferson St . The merchandise was popular with collectors all over the northern Indiana area. Bernice kept the books and attended auctions with Fremont. The couple retired in 1976 and spent many of their winters in Florida. They fished together all over the country. They enjoyed mushroom hunting and out door activities. World travelers, in addition to the United States, they visited Russia, Australia, New Zealand, Finland, Mexico, Hawaii, France, England, Holland, Germany, Switzerland and Canada. Bernice often said that her most rewarding joint venture with Fremont was the rearing of their three children. She played bridge, euchre and all card games. She enjoyed spending time with her grandchildren, doting on them and their activities. A former Eastern Star member she entered her Christian faith at the Church of the Brethren. She is survived by Fremont, her husband of 54 years and by their son, Glen E. (Jane) Books, Basking Ridge , N.J. , and two daughters: Candy (Charles) Poor, Plymouth and Cindy Books and spouse Jonathan Gurland, Englewood , Fla. Eleven grandchildren also survive. They are: Melissa R. Williams; Leilani L., Elysia A., Patrice L., Mellinda A., Miranda S. and Molly M. Poor. Also Hannah Gurland and Mark E., Judith E. and Jennifer A Books. Two sisters, both of Plymouth , also survive: Edith Wilson and Bette Parrish. She was preceded in death by her parents and a sister, Glenna McKee. The family will receive friends on Sunday, December 22, 2002, from 2 to 5 p.m. at the Johnson-Danielson Funeral Home, 1100 N. Michigan St. , Plymouth , and for one hour prior to the funeral service on Monday. Funeral services, officiated by the Rev. David Kerkove, pastor of the Plymouth Church of the Brethren, will be held at 11 o’clock on the morning of December 23, 2002 , in the funeral home. Burial will be in New Oakhill Cemetery, Plymouth. Memorial gifts in Bernice’s memory may be made to the Marshall County Hospice or to a charity of the donor’s choice.