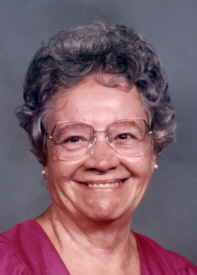 Bernice A. Murphy, 94, of Plymouth, passed away Sunday afternoon in the Catherine Kasper Life Center of natural causes. Bernice remained a lifetime resident of Marshall County following her birth on March 9, 1922 at the Bremen home of her parents, Jesse M. and Cora A. (Hershberger) Parker. She had two siblings Ernest and Blanche.
She received her education in LaPaz and Bremen schools graduating with the BHS Class of 1940. While in high school she took a shine for a young man that she had actually met as a child through the connection of their two families. On June 1, 1941 at her parentâ€™s home the two were united in Holy Matrimony and together in love for the past 75 years they have shared the title of Mr. & Mrs. Otho L. Murphy and have resided at their current home for the past 69 years. They were often seen together at various events including sports in the LaPaz and Bremen area.
After marriage she first worked for Walter Price Abattoir assisting as a business manager for 22 years. She also worked in the office for Berger Farm & Welding and then LaPaz â€“ North Township office.
Bernice had a love of all types of music and shared that with many as a piano teacher in her home and right up to this year as she often played the organ first for Riverside Evangelical United Brethren where she and Otho had membership and then for the Community Church of God in LaPaz.
Longevity through a strong work ethic has prevailed as the couple has continued to tend to their property with the aid of â€˜Betsyâ€™ Berniceâ€™s trusty golf cart. Bernice had a passion for gardening, especially roses and peonies. She loved order in her home and took care that all remained in its place. She enjoyed cooking for the family, sewing her own clothing and making afghans for many. She knitted and crocheted for a purpose of helping others, like lap blankets for hospitals, caps for premie babies and even bandages that reached a need in Africa.
Bernice is survived by her dear family, spouse Otho, a daughter Connie K. Danforth of Indianapolis, a daughter-in-law Judy L. Murphy of Bremen (spouse of deceased son Brent L. Murphy) and their children: Stan J. (Jennifer) Murphy of Bremen, Scott R. (Tabitha) Murphy of Walterton and Jeannie M. (Knight) Wennerstrom III of Rogers, AR. Four loving great granddaughters include: Catara, Amelyia, Lilian and Aria.
She was preceded in death by her son Brent, a brother Ernest Parker and a sister Blanche Yockey.
In accordance with her wishes, family services only will take place and she will be laid to rest in the New Oakhill Cemetery, Plymouth.
To recognize her appreciation of gardening and love for domestic care the family asks that memorial gifts be given to The Marshall County 4H Program which she herself had been involved through the years. c/o Purdue Extension â€“ Marshall County, 112 W. Jefferson St., Plymouth, IN 46563.