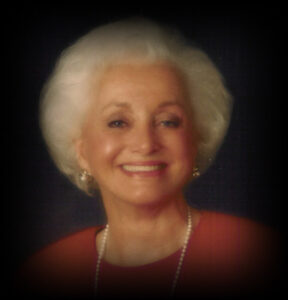 Bernice Evelyn Ersepke Dietz, known affectionately to her friends as “Berne,” died March 10, 2012. She was 82 years old.
Berne was born to Bernhard and Ethel Longmire Ersepke in San Francisco, CA., on August 22, 1929.
She graduated from George Washington High School in 1947, and later attended San Francisco City College.
On April 10, 1949, in Reno, NV, Berne and her high school sweetheart, Bruce Johnson Dietz, were married. The couple spent 28 years in the United States Navy, before Bruce retired as a Commander from the Medical Service Corps. He then worked at George Washington University Hospital in Washington, DC, until his death in 1983.
In 1980-82, Berne, a talented and beautiful woman, was elected president of the Rockville Business & Professional Women’s Club and was also chosen as one of the Women of the Year for the State of Maryland.
Active in many volunteer activities, she served as an Arlington Lady, representing the Chief of Naval Operations at burials of military personnel at Arlington National Cemetery. She also volunteered in the White House Conference Center during the 1990’s and served as a docent at historical colonial homes in Alexandria, VA.
In recent years, Berne enjoyed watching the birds at the feeder, her many favorite TV shows, and listening to books on tape. In her earlier years, she enjoyed international travel, tennis, skeet shooting and spending time with her family.
Berne is survived by her three children: Craig and Lynne Shakelford Dietz, Myrtle Beach, SC; Keith and Kathryn Pierce Dietz, Needham, MA; and Brian and Patty Euler Dietz, Plymouth, IN, with whom she made her home for over 6 years.
She loved Plymouth and living with her son and daughter-in-law, their children and their pets, especially their dogs, Dixie, Holly, & Abby.
Six grandchildren also survive: Neill Dietz, Jason Dietz, Rebekah Dietz, Jessica Dietz, Shannon Dietz (Carlton) Carley, and Josh Dietz.
Two great-grandchildren: Asa Josiah Carley and Scarlet Katherine Carley survive as well.
Berne was preceded in death by her parents and her husband, Bruce.
Services will be graveside at Arlington National Cemetery, Arlington, VA In lieu of flowers, the family has suggested a donation be made to the either of the following:
Center for Hospice Care, Inc., 112 South Center Street, Suite C, Plymouth, Indiana 46563, or visit their website at www.centerforhospice.org to make an on-line donation
Navy-Marine Corps Relief Society (NMCRS), 875 North Randolph St., Suite 225, Arlington, VA, 22203, or visit their website at www.nmcrs.org to make an on-line donation