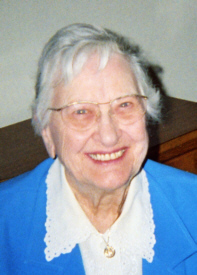 Bernice M. Szocinski, 96, a resident of Catherine Kasper Home after coming from Avon Park, Florida, passed away at 8:13 p.m. on Sunday, April 10, 2016.
Bernice was born in Afton, Michigan on March 16, 1920 to Arthur J. and Anna M. (Amthor) Brasseur.
She became the bride of Stanley L. Szocinski, and to this union came four children: Rosanne, Phyllis, Mary Jane and Stan.
Bernice was a school teacher for 30 years in Jackson, MI teaching in both St. John Catholic School and East Jackson Public Schools, before her retirement in 1981. In those years, she attained a Master’s degree and was hours away from getting her second Master’s degree.
In 1985, she would move to Avon Park, Florida where she made many more friends and became involved in her community.
Bernice was a member of the MEA (negotiation board), the Blue Army prayer group, a 3rd Order Carmelite, MARSP, Phi Beta Kappa, Delta Kappa Gamma, Campers Coho #77 and volunteered for the American Red Cross. She also at one point in her life, volunteered in an orphanage in Peru on a mission trip.
She was an avid reader. Bernice enjoyed sewing and making clothing for herself and her family, and making hats. But above all, she loved her family and was a wonderful grandmother and mother.
Bernice is survived by her children: Sister Rosanne O.P. of Grand Rapids, MI, Phyllis (Michael) Petersen of Dowagiac, MI, Mary Jane (Mitchell) Martz of Parma, MI and Stan (Joanie) Szocinski of Auburndale, FL; 8 grandchildren and 16 great-grandchildren; and brother, Carl Brasseur of Cadillac, MI.
She was preceded in death by her husband, parents and her 9 siblings.
A Rosary will be recited at 5:15 p.m. in the Catherine Kasper Chapel on Friday, April 15, 2016.
Visitation will be held one hour prior to Mass beginning at 10 a.m. on Saturday April 16, 2016 in the Catherine Kasper Home Chapel, 9601 Union Road, Donaldson, IN 46513. Mass of Christian Burial will be held at 11:15 a.m.
Burial will be in the Avon Park Cemetery, Avon Park, Florida.
Memorial contributions can be made to Catherine Kasper Life Center, P.O. Box 1, Donaldson, IN 46563 or Marshall County Hospice 112 S. Center Street Suite C Plymouth, IN 46563.