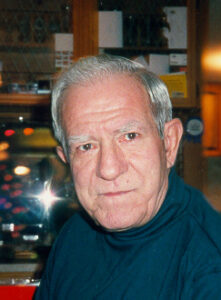 Lifetime Marshall County resident, Bert J. Brockus, 75, died, after a long battle with cancer, at his residence, 12465 Thumper Trail, LaPaz, at 8:20 a.m., Wednesday, June 2, 2004. Born in Argos on August 10, 1928, Bert was the son of Buros and Margaret Meir Brockus. He attended Argos High School.
Bert served in the United States Marine Corps as a corporal from 1946 to 1949. He earned the W.W.II Victory Medal.
On August 12, 1950, in Argos, Bert and Rosemary E. Shaffer were married.
He worked for the Bendix Corp. in South Bend from 1951 to his retirement in 1986, a total of 35 loyal years.
Mushroom hunting was one of Bert’s favorite pastimes. He also enjoyed reading western novels, traveling, telling jokes, gambling and harvesting black walnuts for friends and family.
Bert is survived by Rose, his wife of almost 54 years, LaPaz, and their two children: son, Brent J. Brockus and daughter, Brenda K. and Ron Meyers, all of Plymouth.
Four grandchildren also survive. They are: Bret Brockus, Knox; Amy Millar, and Elizabeth Meyers, Plymouth; Erica Meyers, South Bend. Two great-grandsons survive as well. They are Bryantle Brockus and Kyle Brockus.
A brother, Bob Brockus, Sun Lakes, Ariz., and three sisters survive also. They are: Bernice Erow, Milford, Ind., Mary Batcho, Plymouth, and Evelyn Bowman, Sturgis, Mich. Numerous nieces and nephews also survive.
Bert was preceded in death by his parents and by four sisters: Julia Street, Harriett Harrell-Rosenbaum, Jerry Roahrig and Dorothy Arndt. One brother, Lester Brockus, has also died.
Friends will be welcomed by the family to visit and share memories on Friday, June 4, 2004, from 5 to 8 p.m. in the Johnson-Danielson Funeral Home, 1100 N. Michigan St., Plymouth, Ind.
Funeral services for Bert will be at 10:30 a.m. on Saturday, June 5, 2004, in the funeral home. The Rev. Lane Burgland, pastor of the Churubusco Faith Lutheran Church will officiate.
American Legion Post #385 of which Bert was a member will honor his service to his country with graveside rites at New Oakhill Cemetery, Plymouth.
Memorial gifts in Bert’s memory may be sent to the Marshall County Hospice.