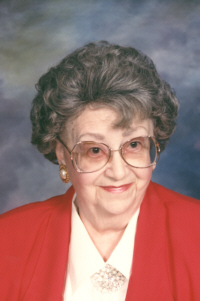 Lifetime Argos resident, Bertha P. Wilhelm 85, died in Miller’s Merry Manor, Culver, on Saturday, November 5, 2005, at 12:58 p.m. She had formerly lived at 218 Yearick St. in Argos, Indiana.
Bertha was born in Argos on May 3, 1920. She was the daughter of Omer Emerson and Cordia Mary Flagg.
She graduated from Argos High School with the class of 1938.
On October 22, 1939, Bertha and Ermel Wilhelm were married in Metea, Indiana. Married for 56 years, Ermel died in August of 1995.
Bertha had worked at the Morgan Telephone Co. in Argos; then nine years at the Argos Post Office and later, eight years as a teller in the State Exchange Bank of Argos.
A true homemaker, Bertha enjoyed and loved her children and grandchildren. She was adept at knitting and crocheting and was an avid reader.
She was a member of the Argos Bible Church and a former member of Eastern Star.
Bertha is survived by Barbara Neidlinger, a daughter, of Culver, Ind., and by two sons, Stanley and Mary Wilhelm, Argos and Jerry and Kay Wilhelm, Inverness, Florida
9 grandchildren and 19 great – grandchildren also survive.
She was preceded in death by her parents, her husband, and two siblings: a sister, Reba Dunlap and a brother, Albert Flagg and a granddaughter
Friends will be welcomed by her family to celebrate her life on Wednesday, November 10, 2005, from 4 to 8 p.m. at the Johnson-Danielson Funeral Home, 1100 N. Michigan St., Plymouth, Ind.
Funeral services for Bertha will be at 11 a.m. on Thursday, November 11, 2005, at Argos Bible Church 210 South Maple Street, Argos, Indiana.
Burial will be in the Maple Grove Cemetery, Argos, Ind.
Memorial gifts in Bertha’s name may be made to the Argos Bible Church or to The Center for Hospice and Palliative Care