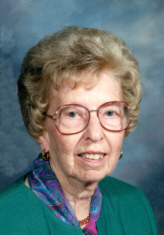 Bette J. Lee, 98, of Plymouth, passed away peacefully at 8:38 a.m. Thursday morning at the Tanglewood Trace in Mishawaka where she has resided for the past year. Bette was born July 1, 1918 in Plymouth, to the late Harry Orville and Grace Alma (Stockman) Wright. She attended schools in Bremen and Valparaiso, but graduated from Plymouth High School in 1935.
On September 14, 1939 in Plymouth, Bette married Arnold Lee; he preceded her in death on April 7, 1997.
Bette was a secretary for many years; first working at a local Finance Company, then spending eighteen years with the Plymouth School system. She was a member of the Plymouth Baptist Church where she taught Sunday school and also was involved in the youth work. She traveled extensively with Arnold. After retiring, Bette took up painting and won numerous awards. Surviving are her children; Tom (Panni) Lee of South Bend, Jane (Dennis) Casey of Wilmington, NC, five grandchildren and one great-grandchild. Sisters include; Kate White, Julia Hatfield, Mary Phillips, Peg (Jim) Clevenger all of Plymouth and Jean Carlisle of Atlanta. Several nieces and nephews also survive.
She was preceded in death by her parents, husband, and one brother; John Wright.
Visitation will be held on Wednesday, March 22, 2017 from 10 a.m. until 12 noon in the Johnson-Danielson Funeral Home, 1100 N. Michigan Street, Plymouth.
Funeral services will follow visitation on Wednesday at 12 noon in the Johnson-Danielson Funeral Home, Plymouth, Indiana 46563. Pastor Clark Harless will officiate. She will be laid to rest next to her husband in the New Oak Hill Cemetery.
Memorial contributions can be made to the Plymouth Baptist Church, 11345 9A Road, Plymouth, Indiana 46563.