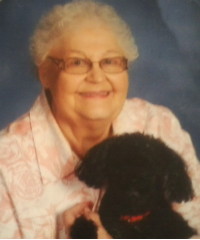 Betty J. Langman, 91, formerly of Plymouth, passed away at her sonâ€™s home in Starbuck, Minnesota on November 11, 2019.
Born in Mishawaka, Indiana on July 4, 1928, Betty was the daughter of Maxwell and Esther D. (Sinn) Miner. She graduated from New Carlisle High School with the class of 1947.
Betty met Theodore H. â€œTedâ€ Langman at â€˜Old Charley Wolfeâ€™s Dance Hallâ€™ in North Liberty. At one of the dances one of the boys told the girls to stomp a little harder. Betty looked up at a handsome young man with curly black hair. She liked what she saw and they soon started dating.
On June 28, 1947, in New Carlisle, Indiana, Ted and Betty were married.
The first two years of their marriage, the young couple lived on a dairy farm near LaPorte and worked with his parents.
Farming was more like a hobby for Betty and Ted. In 1950, they rented a 340-acre farm near New Carlisle. A year later, they moved to Sturgis, Michigan, working on a 600-acre grain farm. In 1952, the Langmanâ€™s moved back to Mishawaka on a 500-acre grain and dairy farm where they lived and worked for six years.
In 1958, Ted and Betty bought a 100-acre dairy farm in North Township of Marshall County. They eventually enlarged it with 38 more acres to the north of their property. Betty was a member of the Minnewaska Lutheran Church and Auxiliary. She was a choir member for the Young at Heart and a singer in her son Jimâ€™s group. She loved dancing and rock and roll. Ted and she had been square dancing since 1947. She was a professional lady clothes shopper and loved jewelry. She loved art and crocheted items for all her grandchildren. She treasured making memories with her generations of grandchildren.
She is survived by her two children: a son and daughter-in-law, James E. and Gloria Langman, Starbuck, Minnesota, and a daughter and son-in-law, Linda J. and Gene Hunn, Mount Verde, Florida.
Four grandchildren: James T. Langman and Jeanine Junker of Starbuck, and Andrew Hunn of Madison, Wisconsin, and Jody Hunn of Bangor, Maine, also survive along with eight great grandchildren.
Betty was preceded in death by Ted in 2006 and her parents.
Burial will take place in the Woodlawn Cemetery in Walkerton, Indiana, at 11 a.m. on Wednesday, November 20, 2019.