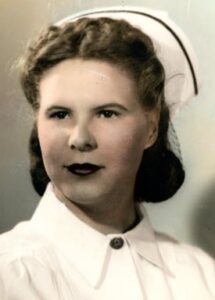 Betty J. Smith, 89 and formerly of Olive Trail, passed away at 10:45 a.m. on Sunday, June 21, 2015 in Miller’s Merry Manor, Plymouth.
Born and stayed a lifetime resident of Plymouth, Indiana, Betty was born on July 10, 1925 to Virgil C. and Bertha M. (Hill) Geisleman. She attended the Plymouth school systems till junior high and then graduated from LaPaz High School with the class of 1943. She then attended nursing school.
On July 31, 1948 in Plymouth, Betty became the bride of Albert L. Smith. He would precede her in death on November 6, 2011.
Betty worked as a RN for Parkview Hospital for 5 years and then for Miller’s Merry Manor in Plymouth for 16 years until her retirement.
She was a member of the former Sunrise Chapel in Plymouth and a member of the VFW Ladies’ Auxiliary #1162. She enjoyed phone calls with family and friends, keeping up to date with what was going on with everyone. She liked to read, do word puzzles and word searches. She also used to collect Avon bottles.
Betty is survived by her their three children: Carol S. (Donnie) Meadows of Culver, IN, Alan L. (Dawn) Smith of Plymouth and Janet L. (Timothy) Manuwal of Plymouth. Her grandchildren are: Todd (Laury Spiewak) Smith, Scottsdale, AZ, Jana Smith of Tempe, AZ, Sean (Hannah) Meadows of Culver, Jeremy Meadows of Bourbon, Thad (Amanda) Manuwal of North Dakota, and Jaymie (Randy) Dickson of Grovertown. Also surviving are nine great-grandchildren. Also surviving are her siblings: Virgil (Judy) Geisleman of Plymouth, Juanita (Robert) Suseland of Plymouth, Mildred Kuckenmesiter of Nappanee, and a brother-in-law, Rick Parks of North Liberty.
She was preceded in death by her husband, parents, two infant sons, and brothers, Richard and Chester Geisleman, sister, Donna Parks.
Visitation will be from 5-8 p.m. on Friday, June 26, 2015 in the Johnson-Danielson Funeral Home, 1100 N. Michigan Street, Plymouth.
Funeral services will be at 10:30 a.m. Saturday, June 27, 2015 in the funeral home with Rev. Charles Krieg officiating.
Burial will be in the Oakhill Cemetery.
Memorial contributions can be made to the Center for Hospice, 112 South Center Street #C, Plymouth, Indiana 46563.
The family would like to thank Miller’s Merry Manor and Center for Hospice for their loving care.