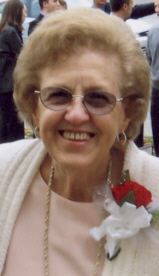 Betty Jean Wilhelm, 80, died at 12:40 A.M. Friday, December 10, 2010 in the Catherine Kasper Life Center in Donaldson.
She was born in Grovertown, Ind., the daughter of Edward and Vera Stutsman Harness.
Betty graduated from Grovertown High School in 1948, and on April 15, 1950, she and Jerome (Jerry) were married in Hamlet and made their home in Plymouth.
She worked for Meck Electronics, Wagner Wire and for 25 years Betty was a production worker at the Young Door Co.
She was a member of St. Michael Roman Catholic Church, the National 600 Bowling Club, IBEW 1975, UAW Local #52, past member and officer in the K of C Auxiliary; Plymouth Rock Ladies Golf League, the AARP and the Harvest House. Betty enjoyed golf, Plymouth sports and was all about being involved with her growing family of grandchildren and great-grandchildren.
Betty is survived by two daughters: Linda (Ed) Trump and Nancy (Jerry) Bowman, all of
Plymouth.
Four grandchildren: Amy Bowman, Brian Trump, Brenda (Chris) Miller, and Angela (Ike) Mendoza also survive. Six great-grandchildren, Daimen Trump, Franco and Ava Mendoza and Cody, Colton and Cayden Miller survive as well.
Also surviving are two brothers; Carl (Eleanor) Harness of Grovertown and Marion “Cy” (Gloria) Harness of Hamlet, sisters-in-law; Barbara Harness of Nappanee, Bev Haley of Crown Point, Mariann Gappa of Bass Lake and family as well as a brother-in-law; Dan Haley of Winamac along with many nieces and nephews. Betty was preceded in death by her parents, a brother Harry, a grandson, Brad Trump and her spouse Jerry.
Friends may visit with the family on Monday, December 13, 2010 from 5 – 8 p.m. in the Johnson-Danielson Funeral Home, 1100 N. Michigan St., Plymouth where a Rosary will be recited at 7:30 p.m.
Mass of Christian Burial will be celebrated at 11 a.m. Tuesday, December 14th in St. Michael Catholic Church, 613 N. Center Street, Plymouth where visitation will continue after 10 a.m. Fr. William Kummer will be the celebrant. Burial will follow in New Oakhill Cemetery, Plymouth.
Memorial gifts may be made to St. Michael Parish 612 N. Walnut St. Plymouth, IN 46563, Catherine Kasper Life Center P.O. Box 1, Donaldson, IN 46513, or Southern Care Hospice.
Funeral Director: Randall L. Danielson