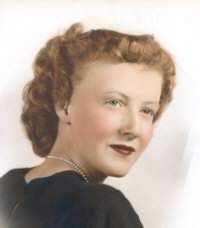 Betty Lou (Shock) Snay, 73, of 909 North Walnut Street Plymouth, died Monday, October 18, 2004 at 9:45 A.M. of natural causes in the Hospice House of South Bend.
Betty was born in Plymouth, Indiana on November 24, 1930 to William Harvey and Dorothy Taylor Tomlinson.
On May 11, 1950 Betty married Elvin (Carl) Shock, he passed on April 15, 1983, then in Plymouth, Indiana, on February 10, 1984, she married Arthur W. (Jack) Snay.
She was a lifelong resident of Marshall County and retired from Pilgrim Manor Nursing Home in 1990 after 25 years of service in the Laundry Department. Betty also served as a school crossing guard on Michigan Street for Jefferson Elementary School.
Betty was a member of the Plymouth VFW Auxiliary. She was a very devoted wife, mother, and grandmother, who also loved her pet cats and dogs. In her younger years she would roller skate and continued to have dancing and listening to music as favorite past times.
Betty is survived by her husband, Jack and her two sons, daughter and step son: Roddy L. and Debbie Shock, Houghton Lake, Michigan, Denny C. Shock, Plymouth, Penny L. (Shock) Dixon, Plymouth, and Arthur F. and Dawn Snay, Plymouth.
She is also survived by her 7 grandchildren, Eric Shafer, Plymouth, Kelly Trott, Koontz Lake; Chad Shock, Plymouth; Mindy Shock, South Bend; Kyle Shock, Houghton Lake; Becky Blosser, Bremen; Adam Shock, Milwaukee, Wis. her five step–grandchildren are: Lori Johnson, Wyatt Thomas, Mandy Sarna, Steven and Griffen Snay. 11 great grandchildren also survive.
Betty was preceded in death by her parents, and her first spouse.
Visitation for Betty will be held from 5 to 7 p.m. Wednesday, October 20, 2004 in the Johnson-Danielson Funeral Home, 1100 N. Michigan St. Plymouth
Funeral services will follow visitation on Wednesday, October 20, 2004 at 7:00 p.m. in the Johnson-Danielson Funeral Home, with the Rev. Nathan Babcock officiating.
Entombment will be in the New Oakhill Cemetery, Plymouth.
Memorial gifts may be made to the Marshall County Hospice.