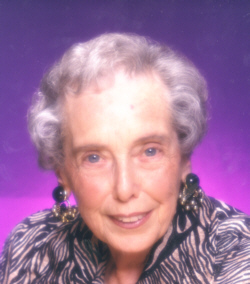 Betty Peabody, 87, formerly of 301 Lewis St., Plymouth, died of natural causes at 9 a.m. on Saturday, January 24, 2009, in Florence, South Carolina.
Born in Plymouth on August 29, 1921, Betty was the next to youngest of nine children born to Harold and Flora Etta Railsback Steiner. Her father was a popular and well-known auctioneer in Marshall County.
Betty told how after the depression hit, the family moved to the country and had no electricity or water in their home; she did her homework by oil lamp.
She went to Inwood School for three months and then to Linkville School for the sixth grade and spent the seventh grade at LaPaz.
She also attended Washington and Webster Schools and graduated from Plymouth High School with the class of 1940.
Right after graduation she went to work for Montgomery Ward in the catalog department. She worked 55 hours a week for $25.00. And thought it was great!
Betty met Cyrus Roy “Butch” Peabody at the roller skating rink. They courted for several years, but waited until “Butch” got home from World War II, and were married on April 7, 1946, in the First United Methodist Church.
After the military service, the Peabody’s lived in O’Fallon, Missouri, for 20 years and Betty worked in the Fort Zumwalt School System. They moved back to Plymouth in 1984.
Betty and Butch loved to square dance, both modern and western. While living in the St. Louis area, they belonged to five different square dance clubs and danced at one of them every Sunday night. They belonged to the St. Louis Federation of Square Dancing and were officers of the State Federation. They participated in a number of national square dance festivals.
She loved to pick blueberries and was called by her friends, “The Blueberry Gal.”
Betty was a member of the Veterans of Foreign Wars Auxiliary, Post 1162, the Bourbon American Legion and the United Methodist Women, Tyra Constance Guild and the Morning Circle of the First United Methodist Church.
Betty is survived by a daughter, Phyllis (Jack) Cole, Florence, South Carolina, and a son, Duane (Kay) Peabody, Laurel, Maryland. Four grandchildren and nine great-grandchildren survive as well, together with a brother, Russell Steiner, Bartow, Florida, and two sisters: Beatrice Faulkner, Niles, Michigan, and Julia Whitesell, Rotunda West, Florida.
Betty was preceded in death by her parents, her husband and Lois Hampton, a sister.
Friends are invited to share memories and celebrate Betty’s life with her family at the Johnson-Danielson Funeral Home, 1100 N. Michigan St., Plymouth, on Wednesday, January 28, 2009, from 4 to 7 p.m.
Funeral services for Betty, officiated by the Rev. Dr. Dean Fager, pastor of the First United Methodist Church, will be held in the church at 2:30 p.m. on Thursday, January 29, 2009.
Burial will be in Maple Grove Cemetery, Argos, Indiana.
Memorial gifts may be made to the First United Methodist Church in Betty’s memory.