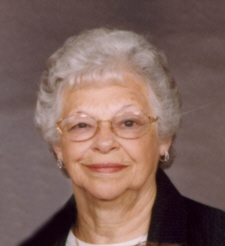 Betty Marie Haag, 78, a lifetime resident of Plymouth, died Sunday, December 7, 2008, at 4:30 p.m., at her residence, 15589 W. 7th Rd., Plymouth.
Born in Plymouth on September 30, 1930, she was the daughter of Lloyd and Ellen Marie Stuckey Shafer.
She graduated from LaPaz High School with the class of 1949.
On January 13, 1952, at the Tyner E.U.B. church, Betty and Paul K. “Bud” Haag were married.
Paul and Betty purchased a farm and raised registered Black Angus cattle. As a family, they were very active in 4-H.
Betty worked for Bomarko in Plymouth for 25 years, retiring in 1992.
Her family, especially her grandchildren, were most dear to Betty. She enjoyed attending Angus cattle shows. She was celebrated as being an excellent cook and house keeper.
Betty is survived by her husband, “Bud,” and their son, Michael Paul and daughter-in-law, Peggy, and by their daughter Margaret Marie and son-in-law, James Berger, all of Plymouth.
Her grandchildren, Michael and Peggy’s children, Jeremy Haag of Jefferson, Georgia and Chad Haag of Plymouth and Margaret and James’ children, Kim Berger of Leland, Illinois and Jason (Jenny) Berger and great-grandson, Jacob Berger, all of Plymouth, survive as well.
A brother, Eldon (Dodie) Shafer, Plymouth, also survives.
Betty was preceded in death by her parents and three brothers: Charles, Vernon and Edward “Babe” Shafer.
The family will welcome friends to share memories on Thursday, December 11, 2008, from 4 to 8 p.m., and after 7 a.m. on Friday, December 12th, at the Johnson-Danielson Funeral Home, 1100 N. Michigan St., Plymouth.
Funeral services for Betty will be held on Friday, December 12th at 10:30 a.m. in the Johnson-Danielson Funeral Home. The Rev. Steven Van Houghton, pastor of the Pine Creek Church of the Brethren where Betty was a member will officiate.
Burial will be in the New Oakhill Cemetery, Plymouth.
Memorial gifts in Betty’s memory may be made to The Center for Hospice and Palliative Care, Inc., 112 S. Michigan St., Plymouth, IN 46563.