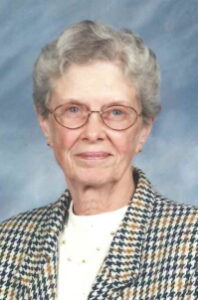 Betty Jane (Johnson) Rhodes, a lifelong Marshall County resident, went to be with her Lord and Savior on February 27, 2020, at Pilgrim Manor in Plymouth, IN. Betty was born to Luther S. and Lila (Larsen) Johnson on September 20, 1925 in Donaldson, IN. She was baptized as one of God’s children on November 24th, 1925. She was then confirmed on June 9, 1940 at Immanuel Lutheran Church. She graduated from West High School in 1943. After graduation she began working at Memorial Record Company in 1944. Betty married Harold J. “Dusty” Rhodes on July 1, 1950 at the Immanuel Lutheran Church. Dusty and Betty purchased the Memorial Record Company on July 1, 1980 and sold the business in 1993. She continued to write memorial record books until she retired in June of 2010. She is survived by, sister Betty Lee, (Guy, deceased) Snell; three sisters-in-law Ruthann Johnson (Duane’s wife), and Carol Johnson (Bill’s wife), and Shirley Johnson (Bud’s wife), Nieces and Nephews: Vicki (Larry) Miller, Susan (Michael) Guljas, Terry Lynn (Kim) Johnson, Jeffrey (Kim) Johnson, Andrea (David) Carr, Monica Johnson, Luther Johnson, Brian (Janet) Johnson, Cathy Keister, Kimberly (Don) Abair, Greg Snell, Guy Snell, Patty (deceased husband Gail) Cook; Many Great nieces and nephews and great great nieces and nephews, Betty dearly loved all of them but these are special because they spent a lot of time in her life, Matthew (Allison) Collins, Jessica (Corey) Cole, Cody Collins, My precious little ones (great-great- nieces and nephews); Gabe and Bella Cole; Many much-loved cousins; and two very special goddaughters: Vicki (Larry) Miller and Joan (Bill deceased) Hunt.
She is preceded in death by the love of her life Dusty on November 16, 1999; her three brothers Russell William (Bill) Johnson on August 20, 2001, Charles Duane (Charlie) Johnson on November 30, 2011, and Floyd Harold (Bud) Johnson on April 17, 2015; and Sister-in-law: Donna Bell Cook- on November 7, 2003.
Funeral Service will be on Tuesday, March 3, 2020 at 1 p.m. at Johnson-Danielson Funeral Home 1100 N. Michigan St. Plymouth, In 46563. Visitation will be from 11:00 a.m. until the hour of service. In lieu of flowers the family requests donations made to Immanuel Lutheran Church in Betty’s name, 6835 Union Rd, Plymouth, IN 46563. Betty would tell you to “please hug someone today and every day”.