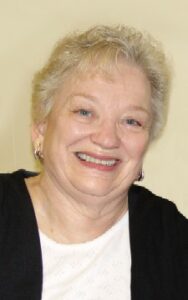 Beverly Ann Jeffirs, 74, died Sunday evening, March 29, 2009, at St. Joseph Regional Medical Center, Plymouth. Bev was a loving, gentle person who will be sadly missed by her family and all who knew her.
She was born October 28, 1934, in Tacoma, Washington to Walter T. and Margaret C. (Brunner) Corrigan. After attending Tacoma Public Schools, she completed three years of study at Washington State College. In 1984 she graduated from Indiana University South Bend with a bachelor’s degree in General Studies.
During her junior year of study at Washington State College, Beverly met Michael in 1955 while Mike was stationed at Fort Lewis Army Post in Pierce County, Washington. On October 20, 1956, Beverly and Michael J. Jeffirs were married at St. John of the Woods Catholic Church in Tacoma, Washington. Michael and Beverly made their home in Plymouth. Throughout their child-rearing years, Bev and Mike returned to Washington every two years to visit Bev’s parents, extended family and friends. They shared the joy of traveling across the country with their children over the years visiting Disneyland, Disney World, Mount Rushmore, Hoover Dam, Washington DC, Seattle and additional destinations. She also traveled to Europe with Mike, her parents and daughter Dana in 1979. Bev fulfilled her goal to return and complete college when she graduated with a bachelor’s degree in General Studies from Indiana University South Bend in December 1984. She was a bookkeeper for Jeffirs Motor, Inc. from 1956 to 1977. In 1977 she became part-owner and bookkeeper for M.J. Package Store in Walkerton, Indiana. Beverly also worked fulltime as a computer operator for the accounting firm of McQueen and Boyer in Plymouth until she retired in 1999.
Bev was a devoted member of St. Michael Roman Catholic Church often participating in weekly adoration services. She was known to give of her time and talents to many service organizations: as an active member and past officer of the local AARP chapter and past board member, a volunteer for Marshall County Older Adult Services and Habitat for Humanity. She developed a passion for genealogy and served as an avid volunteer for the Marshall County Historical Society and Marshall Country Genealogical Society. Bev documented the ancestry of both the Jeffirs and Corrigan families. Bev has many hobbies and interests. She loved attending her children’s and grandchildren’s sporting events, theater productions and concerts. She was also a sports enthusiast – especially for Notre Dame Athletics.
Bev’s proudest achievement was the raising of her and Mike’s twelve children: Marlene (Rick) Minker of Hamlet, In., Michael W. Jeffirs of Greenwood, In., Dana (Brian) Corrigan of Westlake, Oh., Mark (Carol) Jeffirs of Argos, In., Gregory Jeffirs of Plymouth, Christine (Bob) Greig of Northville, Mi., Stephen (Pam) Jeffirs, deceased, Douglas (Stephanie) Jeffirs of Aurora, Il., Kent (Calliopi) Jeffirs of Crown Point, In., Janis (Mark) Holiday of Plymouth, Laura (Jim) Kruyer of Plymouth, and Matthew Jeffirs of Lawrenceville, Ga.
She is also survived by thirty-three grandchildren, four great-grandchildren. They are: Holli Fort; Bethany Laizure; Avalon and James Minker; McKenna, Connell, Quinn and Aidan Corrigan; Amelia Hooper; Nathaniel, Benjamin, Timothy, Abigail and Alexandra Jeffirs; Kayla and Tara Jeffirs; Alexander, Andrew and William Greig; Alison Jeffirs; Jenna and Jacqueline Jeffirs; Stephen, Nicholas, and Maria Jeffirs; Dylan, Cole, Brady and Cassidy Holiday; and Kelsey, Emma, James and Elizabeth Grace Kruyer. Great grandchildren are: Klaudia Kovach, Liam and Max Fort and Taylor Hooper.
One sister, Marlene Poor of Mt. Kisco, NY, one sister-in-law, Rita Jeffirs of Park Forest, Il. and five nieces and nephews. Two brothers, Thomas and Patrick Corrigan, preceded her in death. Friends may pay their respects at the Johnson-Danielson Funeral Home, 1100 N. Michigan St. Plymouth on Wednesday, April 1st from 3 – 8 p.m. where a Rosary will be said at 8 p.m. A Mass of Christian Burial will be at 11 a.m. Thursday, April 2nd in St. Michael Catholic Church, 613 N. Center St., Plymouth with pastor Fr. William Kummer as the celebrant.
Burial will follow in the New Oakhill Cemetery, Plymouth.
Preferred memorial contributions may be made to St. Michael Catholic Church or Marshall County Community Foundation – St. Michael School, Tuition Assistance Fund or to a charity or organization of the donor’s choice.