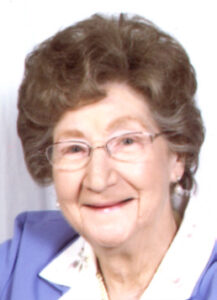 Beverly Rose Mattern, 80, died on Friday September 21, 2012 at 9:25 a.m. in the Elkhart Hospice House.
She was born on November 16, 1931 the daughter of Ellis Lloyd and Lillian Jack Stiles. She attended West High School.
Beverly was married to Clyde H. Mattern whom preceded her in death on March 13, 1982. She was later then married to John L. Mattern who preceded her in death on November 23, 1999.
She worked for 20 years at Plymouth Parkview Hospital as a Certified Nursing Assistant; she then moved on to work for Michiana Community Hospital until the time of her retirement in the early 90’s.
Beverly’s favorite things were cooking and working in her yard. She also enjoyed spending time with her grandchildren and great-grand children.
She is survived by a son Albert A. Mattern of LaPaz, IN; a daughter Selena R. & Steven Waldo of Buchannan, MI; seven grandchildren; several great-grandchildren; a sister Ilene & Glen Hardesty of Grovertown, IN; and three brothers, Vernon & Phyllis Stiles and Ellis & Sandy Stiles Jr. both of Plymouth, IN; and Larry & Jane Stiles of Tennessee.
Beverly was preceded in death by husbands Clyde & John, a son Clyde “Joker” Mattern, a brother Gaylord Monroe Stiles, and a sister Helma Pearson.
The family will receive friends at the Johnson-Danielson Funeral Home, 1100 N. Michigan Street, Plymouth on Tuesday, September 25, 2012 from 4 – 8 p.m. Funeral services, officiated by Chaplain Ed Wilsberg, of the Center for Hospice, will be held at 11:00 a.m. on Wednesday, September 26, 2012, in the funeral home.
Burial will follow in the Bremen Cemetery, Bremen Indiana.
Memorial contributions in Beverly’s memory may be made to the Center for Hospice 111 Sunnybrook Court South Bend, IN 46637.