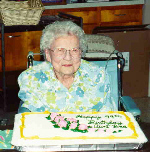 Victoria Bernice “Bea” Odaffer, 99, four months shy of her 100th birthday, died of natural causes at 5:30 p.m. on Wednesday, May 29, 2002 , in the Pilgrim Manor Nursing Home, Plymouth . Bea, formerly lived in the Ardmore area in South Bend and had also resided in Mishawaka ’s 100 Center. She had been a resident of Pilgrim Manor since March of 2001, moving there from Shady Rest where she had lived for three years. Born on a farm near Walkerton on Sept. 18, 1902 . She was the daughter of Louis A. and Dora B. Hullinger Schmeltz. Raised in the Tyner Church of the Brethren, Bea played the piano and organ and loved to sing. She graduated from Tyner High School with the class of 1922, where she was a pitcher on the girl’s softball team. She then completed the South Bend Business College in the class of 1923. On Dec. 31, 1925 , in South Bend , Bea and Thurmand “Devane” Odaffer were married. Her husband died on Dec. 6, 1973 . Bea was a bookkeeper for the Studebaker Corp. for 40 years, retiring in 1964. Known simply as ‘Aunt Bea’, she displayed an acute sense of humor and enjoyed ballroom dancing and traveling. She was a member of the Eastern Star, Chapter 2, the South Bend Progress Club and the General Federation of Indiana Women’s Clubs. She was also a member of the Ladies Auxiliary of the Elks #235, the Ladies Auxiliary of the South Bend Shrine Club and the Scottish Rite and a Woman of the Moose, #1057. Bea was always busy and an integral part of the South Bend social scene. Bea is survived by a brother, Cecil Schmeltz, Plymouth, and several nieces and nephews. A sister-in-law, Lucille (Mrs. Eugene) Schmeltz, Walkerton, survives as well, as the Danny Swindle family, Newport , Michigan , long time South Bend neighbors and forever friends. Bea was preceded in death by her parents, her spouse, two sisters, Alice Wisenbaugh and Edna Miller and two brothers, Eugene and Robert Schmeltz. Visitation with the family will be from 4 to 7 p.m. on Friday, May 31, 2002 , in the Johnson-Danielson Funeral Home, 1100 N. Michigan St. , Plymouth . Funeral services will be at 10 a.m. on Saturday, June 1, 2002 , in the funeral home. The Rev. Charles Krieg, will officiate. Burial will be in Mt. Pleasant Cemetery , South Bend . Memorial gifts in Bea’s memory may be made to the Shriner’s Childrens Hospital.