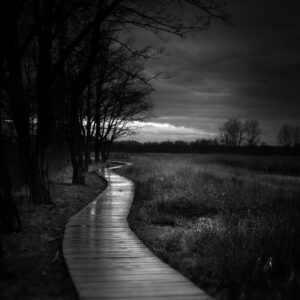 William V. “Bill” Baker, 80, died of natural causes at his residence at 12:17 a.m. on Thursday, February 16, 2012.
Bill was born in South Bend, IN., on September 17, 1931. He was the son of Fernando A. and Mildred Haynes Baker-Jewell. He grew up in Mishawaka.
Bill received his G.E.D., and joined the Navy. He saved five lives as a parachute rigger and by maintaining survival equipment while in the service undoubtably saved many more. He retired from the Navy in 1970.
On May 14, 1994, in South Bend, he and Mildred I. Cormican were married.
He worked in maintence at St. Joseph Hospital, St. Mary’s College, the Fountainview and Regency Nursing Homes and the Greek Orthodox Church in South Bend.
An outdoorsman, he enjoyed hunting and fishing. He tried golf and he and his son had fun and enjoyed it, but he never really mastered the game.
Bill was a member of the V.F.W. in Mishawaka.
He is survived by his wife, Millie, two sons, two daughters and two step-daughters. They are: his sons, William J. (Slynthia) Baker Knox, IN., and Patrick F. (Susan) Baker, South Bend, IN. His daughters are Liane C. ( Richard G.) Hasbrook, Alabaster, ALA., and Brooke C. Baker, Plymouth, IN.
Bill’s Step-daughters, both of Plymouth, are Amber N. Mitchell and Ashley B. (Joe) Mitchell.
Eleven grandchildren and five great-grandchildren survive as well.
Bill was preceeded in death by his parents, a sister, Elizabeth Campoli and twin infant daughters, Collene Lynn and Correne Ann.
The family will welcome friends on Sunday, February 19 , 2012, from 1 to 4 p.m. at the Johnson-Danielson Funeral Home, 1100 N. Michigan St., Plymouth.
Funeral services for Bill will be held at 2:30 p.m. on Monday, February 20, 2012, in the funeral home. Family friend Larry Kreft, will officiate.
Interment will be held at a later date.
Memorial gifts in Bill’s memory may be made to the Wounded Warrior Project.