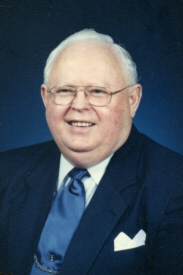 Former Plymouth resident Billie A. Murphy, 86, passed away surrounded by his family Wednesday evening at the Hancock Regional Hospital, Greenfield. He has been a resident of Pendleton since 1999.
He was born Billie Allen Murphy on February 23, 1929 in Argos, Indiana, one of three sons of the late Merill R. and Iva C. (Hittle) Murphy. He graduated from Argos High School in 1947. On March 13, 1949 in the Argos Mt. Hope Church, he married Lois A. Orr and she preceded him in death on May 18, 1997. He then married Mary Louise (Schubert) Sturm on August 28, 1999 and she survives.
Billie retired from the DelMonte Corp. in 1984 after twenty-two years of service where he was a sanitation supervisor. After his retirement he was a night auditor for five years at Super 8 and the Holiday Inn in Plymouth. In Plymouth Billie had worshiped at the First Baptist Church and Plymouth Wesleyan, he also attended Park Chapel Church in Greenfield. Billie was involved in the lives of his six children and with four sons he was a volunteer coach for them and many area youth with the Plymouth Little League Program.
He is survived by his wife, Mary “Louise” Murphy of Pendleton and his children: Roger A. (Treva) Murphy of Plymouth, Russell P. Murphy of Florida, Ricky D. (Carla) Murphy of Plymouth, Ronald E. Murphy of Plymouth, Rose A Goncher and Bob Dunn of Plymouth and Rita M. (Kevin) Miller of Louisville, KY.
Billie also has eight step-children surviving. They are: David A. (Patty) Sturm, Raymond C. (Carol) Sturm, Jeffrey P. Sturm, Elaine M. (E. Max) Worland, Janice K. (Jeff) Hazelbaker, Brenda L. Bodkin, John F. (Carla) Sturm, and Julia A. (David) Leveridge. Also surviving are numerous grandchildren, great-grandchildren and great-great grandchildren. Billie was preceded in death by his parents; first wife, Lois A. Murphy; three great grandchildren, and two brothers; Robert D. Murphy and Harold L. Murphy. The family will receive friends from noon until 2 p.m. EDT on Monday, January 25, 2016 in the Johnson-Danielson Funeral Home, 1100 N. Michigan Street, Plymouth. Funeral services will be held at 2 p.m. EDT on Monday following visitation in the funeral home with Rev. Lonnie Nicholl officiating.
Burial will follow in the New Oakhill Cemetery.
Memorial contributions may be directed to any Hospice Program.