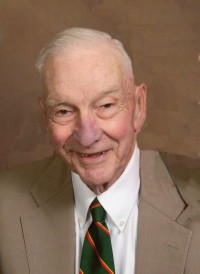 Billie Frank Gee, 86, died Thursday July 16, 2020 at Miller’s Merry Manor in Plymouth, IN.
Bill was born on March 23, 1934 to William and Callie Gee in Elnora, IN. He graduated from Washington (IN) High School in 1952 where he was Class President and Captain for his Hatchets basketball team. Declining the opportunity to play on the St. Louis Cardinals baseball “farm program” as a catcher upon completion of high school, Bill attended Vanderbilt University where he was a member of the Commodores basketball team, Alpha Tau Omega Fraternity and NROTC. Upon graduation in 1956, he began active service in the United States Marine Corps, achieving the rank of 1st Lieutenant, while stationed in Quantico, VA; Camp LaJune, NC; and Parris Island, SC; before receiving his honorable discharge in 1958.
Bill married Mary Lynn Johnson on December 30, 1956, in Washington, IN, and began a marriage marked by escapades and enduring love. Following his service in the Marines, Bill taught and coached boys basketball for one year in Alfordsville, IN; before moving to Plymouth, IN, to become a sales representative for Harper & Row publishers. Bill continued sales and management roles in the school textbook industry, retiring in 1992. Always committed to civic service, Bill worked tirelessly as the Marshall County Republican Chairman for 12 years during which time he managed the Plymouth License Branch and was an integral part of the core campaign team/staff for Indiana Governor Otis Bowen. Bill later served as the United States Director of the Office of Refugee Resettlement working under the US Secretary of Health and Human Services “Doc” Bowen and for Presidents Ronald Reagan and George H.W. Bush. Following his work in Washington, D.C., Bill returned to local politics, serving on the Marshall County Council. For his accomplished service to his civic duties, Bill received the Sagamore of the Wabash award from three Indiana Governors: Whitcomb, Bowen, and Orr.
Bill loved sports. He was a lifelong St. Louis Cardinals fan and made it a family tradition to attend NCAA Men’s College Basketball Final Four games around the country throughout the years. He was able to accomplish a life goal of attending the Masters, while never turning down a round of golf with any of his friends or family, taking him to numerous notorious golf locales around the country and the world. One of Bill’s favorite golf stories involved an immaculately clad golf starter who required clean-up after he “Took a little turf there, buddy?” from Bill’s tee-off divot. During his early years in Plymouth he was the “Voice of the Rockies/Pilgrims,” announcing both PHS football and basketball games and could even be seen on the Plymouth tennis courts, substituting during team tennis. Bill enjoyed telling a story. He debated and discussed in detail his various life events and observations with friends, colleagues, co-workers and anyone willing to listen. He often shared tales about his family and grandchildren, with whom he enjoyed spending his time. Songs were spontaneously sung by Bill, to commemorate special family events such as the tune Cold Water which was belted out on occasion when his daughter ‘used up all the hot water while showering.” An oft retold family anecdote from Bill was his thorough instruction to his wife in “scientific shopping” at the grocery store involving purchase of sale items and use of coupons.
Bill had an infectious positive attitude, always willing to be forthright with his opinions and expeditious in his actions to improve his community. Bill’s life was distinguished by his humanity in living, his loyalty in friendship, his wisdom in council, and his inspiration in leadership. He is survived by his wife Mary Lynn Johnson Gee and daughter, Elizabeth “Betsy” (Randy) Gee Biederstedt of Indianapolis. Bill and Lynn have 2 grandchildren: Susan Lynn Biederstedt and John William Biederstedt. He is survived by his sister, Anna Ruth Walsh of Sun City West, AZ, and by many nieces, nephews, and extended family.
Bill is preceded in death by his parents and brother, Samuel Byron Gee. Friends may call on Friday, July 24th, 6:00 – 8:00 p.m. in the Johnson-Danielson Funeral Home, 1100 N. Michigan St., Plymouth. A private family service celebrating his life will be held on Saturday, July 25th at 11:00 a.m. in the Plymouth First United Methodist Church Fellowship Hall, 400 N. Michigan Street, Plymouth. The service will be available for attendance via Zoom and YouTube. The Rev. Toni Carmer will officiate. Public interment will take place at 12:00 p.m. at New Oak Hill Cemetery. In lieu of flowers, memorial gifts may be made to the Boys and Girls Club of Marshall County, 314 E. Jefferson Street, Plymouth, IN 46563, Plymouth First United Methodist Church, 400 N. Michigan Street, Plymouth, IN, 46563, or Plymouth High School Athletic Booster Club, P.O. Box 824, Plymouth, IN 46563.
PLEASE NOTE: For your protection, the entire funeral home staff will wear masks. It is mandated that family members and their guests do so as well. The funeral home will not provide any masks.