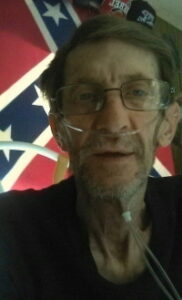 Billy Wallace, age 62, passed away on November 30, 2019 after a long health battle. He was born in Rowan County, KY to Truby Wallace and Christine Binion (nee Morris). He was the oldest of three boys. He married Margo Birk in Plymouth on August 2, 2001. Billy enjoyed the outdoors, camping and fishing and watching birds. He enjoyed spending time with his family and also enjoyed being on his CB Radio. His handle being “Bird Keeper” or “Rebel”.
Billy is survived by his wife Margo; children Michael, Anthony, and Rayann; step-daughter Amber Read and her children Riley, Logan, and Tyler; step-son Jonathon Scott, all of the home.; step-son James (Amber) Scott and their children McKenzie, Hannah, Carson, Greyson, and Ellie of Plymouth; two sons, William Wallace of South Bend IN, and Joseph and Sherry Wallace of Winchester KY; Three daughters, Eleca and Jeremy Melton of South Bend IN, Heather and Robert Halko of Grovertown IN, and Patricia and Joe Foshee of Plymouth IN; and from them fifteen grandchildren, and three great-grandchildren; Half-brothers Gregory Scott (Sharon) Walker and James Russell Walker, all of Winchester, KY. Good friends Jack Elliott and Glenn Gridley, several other family members and friends also survive. He was preceded in death by his parents Truby Wallace and Christine Binion. Visitation will be from 11-1 PM Thursday, December 5, 2019 at the Johnson-Danielson Funeral Home, 1100 North Michigan Street, Plymouth. Funeral services will follow at 1:00 PM.
In lieu of flowers donations to Bread of Life 6770 N. Michigan Road Plymouth, IN 46563