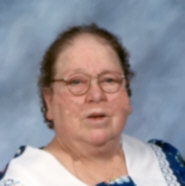 Bonna M. Toth, 65, of Union Road died of natural causes, at 8:04 P.M. Saturday May 16, 2004, in the St. Joseph Regional Medical Center, Plymouth.
Bonna was born on July 18, 1938 in Hammond, Indiana to Harold C. and Elsie Nora Hartz Henderson Sr. She was a member of the Hammond High School Class of 1956.
She was formerly of Kewanna and Rochester, having resided in the Plymouth area since 1975. Bonna had resided at Garden Court West prior to her move in February of 2003 to Catherine Kasper Life Center.
Bonna was employed as a cook which she loved doing for many area nursing homes, for Ancilla and the Catherine Kasper Home she served as a Q.M.A. and dietary assistant for 11 years retiring in 1994. While living at the Life Center, Bonna became a volunteer staffer of the reception area for the Catherine Kasper Home.
She enjoyed writing poetry, needlework and most recently she crocheted small blanket used for pre-mature infants. Bonna had a big heart and was always giving of others. She was active and for many years was treasurer for the Marshall County Right to Life and had attended services at the Nappanee Missionary Church, Nappanee, Ind.
Bonna is survived her mother Elsie a resident of Pilgrim Manor, one sister, Helen M. (Bill) Caudle, Middletown, Ohio, and four brothers: Robert (Sherri) Henderson, Azle, Texas, Michael (Alvina) Henderson, River Heights, Utah, Harold (Sandy) Henderson, Dayton, Ohio, Daniel Henderson, Bloomington, Indiana, Many close friends survive, including David and Becky Hartman and children Rachel & Elizabeth, Willard and Ruth Pletcher, Joe and Joann McCormick, Shirley Green, Sister Virginia Kampworth P.H.J.C., and Gary and Darlene Edgecomb.
Preceding Bonna in death was a sister, Lona Arlene Howdeshell, and a brother, William Edward Henderson.
Family and friends will gather for a celebration of Bonna’s life on Wednesday, May 19, 2004 from 6 to 7 p.m. in the Johnson-Danielson Funeral Home, 1100 N. Michigan St. Plymouth. Funeral Services for Bonna will follow visitation at 7:00 P.M. on Wednesday May 19, 2004, in the funeral home.
Burial will take place in the New Oakhill Cemetery, Plymouth, Indiana
Memorial gifts in Bonna’s memory may be made to Gideons International, or The American Lung Assoc.