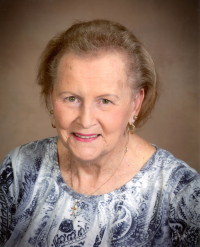 Bonnie Lou Yeazel, 88, passed away in her home on Friday afternoon May 1, 2020.
Born in Three Rivers, Michigan on July 2, 1931, Bonnie was the daughter of Donald Ray and Icia Frances (Fishbaugh) Gardner. She graduated from Plymouth High School with the class of 1949.
Bonnie and James Eugene “Jim” Yeazel first met at Franklin College in 1950 while Jim was visiting Plymouth friends. On their first date, he took Bonnie to the races at the New Paris Speedway. They were married at Bonnie’s home by Rev. Blake on March 23, 1951.
Along with raising their sons and daughter, Jeffrey, David and Lori, Bonnie was active in the community. She worked for Derf Jewelry for six years and then worked the holiday season for a number of years. She started the Plymouth Child Day Care Center of Plymouth and retired when it became Kaleidoscope, and then became a teacher’s aide at Washington Elementary. She would then go back to work for Plymouth Schools for a few years before going back to work for the Day Care Center. She would retire when Marshall Starke took over the program in 1992. Bonnie was a lifetime member of the First United Methodist Church. There, she was a member of the Women of Worth and the church choir. When working for the schools, she was a member of the Lunch Bunch, who met outside when they had the chance to eat and catch up. Bonnie was a member of the Eastern Star, the Plymouth and Lakeville Chapter, and the Delta Theta Tau.-Zeta Beta Plymouth Chapter. She spearheaded the skate park at Centennial Park, volunteered at the United Way and was the first female Mayor of Plymouth.
Bonnie is survived by her children and grandchildren: a son, Jeffrey J. (Marsha) Yeazel, Plymouth and their children; Sarah Yeazel, Jonathon Yeazel, (Mandee) Waylon and Asher Budka. A daughter, Lori E. (Jeffrey) Mills, also of Plymouth and their children; Devin Taviner, Kenrick (Samantha) Mills, Cody (Aubrey) Mills and Deena (Donny) Osborn, Seven great-grandchildren, and her special puppy “Punkin.”
She was preceded in death by her husband of 60 years, Jim Yeazel, her son David Ray who passed in 1988, parents, and her sister Betty Spoor.
Due to the restrictions on social gatherings, the family will have a private service in the New Oak Hill Cemetery, Plymouth.
A celebration of life will be held a later date. Memorial contributions can be made to the First United Methodist Church of Plymouth or to the Rebuilding First Church, 400 N. Michigan St, Plymouth, IN 46563.