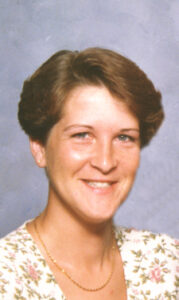 Surrounded by her loving family and with the support of the Marshall County Hospice, Brenda L. Birchmeier, following an inspirational 17-year battle against cancer, died at her residence, 11100 Shady Lane Drive, Plymouth, at 7:15 p.m. on Wednesday, June 27, 2007.
Throughout her life, Brenda was a devoted wife, mother, which included being the “neighborhood Mom” and grandmother. She was 45- years old.
Brenda, a lifetime Marshall County resident, growing up in the Donaldson area, was born in Plymouth, the daughter of Tom W. and Sondra L. Kepler Christiansen, on July 22, 1961.
She graduated from Plymouth High School in 1979, and went on to become a certified cosmetologist. On November 3, 1979, in St. Michael’s Roman Catholic Church in Plymouth, Brenda and Jeffory A. Birchmeier were married. They lived in Martinsville, West Virginia for two years.
Brenda loved animals, especially her two Rottweilers and was an ardent supporter of the Marshall County Humane Society.
She had enjoyed playing golf and bowling and participated in both leagues. She loved watching her sons’ activities, reading, exercising and walking.
Brenda is survived by Jeff, her loving spouse of 27 years, and their three sons, all of Plymouth: Brandon A. and Latisha Birchmeier: Derek C. Birchmeier and Evan J. “Boo” Birchmeier.
Three grandsons also survive. They are: Gage Allen, Dylan and Cameron.
Brenda’s parents of Plymouth, survive as well, together with a brother, Matthew Christiansen, Plymouth, Indiana: a sister, Vicki (Mark) Staples, Mishawaka and several nieces and nephews. Her mother-in-law, Pattie Birchmeier of Plymouth, also survives.
Friends are invited to celebrate Brenda’s courageous life with her family at the Johnson-Danielson Funeral Home, 1100 N. Michigan St., Plymouth, on Sunday, July 1, 2007, from 3 to 6 p.m. and after 7 a.m. on Monday, July 2nd. A Rosary will be prayed at 6 p.m. on Sunday evening in the funeral home.
A Mass of Christian Burial will be held for Brenda at 11 a.m. on Monday, July 2, 2007, in St. Michael’s Roman Catholic Church, 615 N. Center St., Plymouth. The Rev. Father William Kummer will officiate.
Burial will be in New Oakhill Cemetery, Plymouth.
Memorial gifts in Brenda’s memory may be made to the Marshall County Humane Society or to the Marshall County Hospice and Palliative Care.