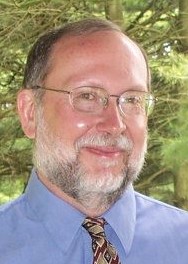 Brent Christopher Marriott died peacefully in his dream home on The Farm where he grew up, in Plymouth, Indiana, after a short illness. He was 59 years old.
He was born in Plymouth, Indiana, to Loren and Lola (Finney) Marriott, who preceded him in death, along with a brother, Jay Marriott.
After graduating from Plymouth High School, he advanced to Purdue University, where he earned a degree in Aerospace, Aeronautical and Astronautical Engineering. Thus, began a career of more than 37 years. He worked at Bendix (later Allied Signal) in Mishawaka. Alongside a team he designed missile target programs, providing engineering support to more than 200 missile launches. In this role, he travelled frequently to Hawaii, New Mexico, California, and Wallops Island in Virginia. More importantly, he met many friends with whom he developed lifelong relationships. Together, they played softball, enjoyed â€œhappy hoursâ€ and countless chili parties, and generally set out on adult lives.
After the Mishawaka facility closed, he worked for Orbital Sciences, Bosch, MTI and finally, back at Honeywell for the past 7 years, where he was the technical lead for A380 wheel and brake programs. Throughout his long career, he worked alongside many talented and caring people.
Among his many interests, Brent participated in competitive pistol shooting, as a member of the Mishawaka Rifle and Pistol Club for 35 years, serving on the board of the St Joseph Valley Rifle and Pistol Association for 20 years. He shot as a member of both the SJV and Indiana State Pistol team at National Championships at Camp Perry for many years. He looked forward to opening weekend of deer-hunting season each year, inviting only the most trusted fellow hunters onto The Farm to join him.
An avid science fiction fan, he read many anthologies and novels by a variety of authors, and frequently invited friends over for a Battlestar Galactica viewing nights. He enjoyed going to plays at the South Bend Civic Theatre and was a season ticket holder for several years. His favorites were the farces, which suited his personality.
Because he liked all things old and mechanical, he collected vintage trucks and classic cars, but his were all â€œdriversâ€ not showroom vehicles. He annually visited the Labor Day Auto Auction in Auburn, Indiana. He also supported the Studebaker Museum in South Bend, recruiting multiple tables of friends to play trivia each spring.
A life-long Chicago Cubs fan, he wouldnâ€™t have believed they won the World Series if he hadnâ€™t watched it himself to the very end. He relished taking the South Shore to Wrigley for games, and never left before the final out, even if the game had a 2-hour rain delay and went 14 innings. Brent never gave up until they raised the â€œWâ€ flag.
Because he did not have children of his own and married late in life, his friends were family to him. Always willing to help, he felt most useful fixing things or spending hours putting his tractor to work at The Farm.
In March of this year, he married Beth Mengel, who survives, with her son Jayson Trost, her daughter-in-law Stephanie and grandsons, Noah and Luke. Brent got a kick out the boys, especially when they were â€œbeing boys.â€ Brent and Beth designed and built their dream home together after many happy years of planning.
Brent is also survived by his sister, Beverly Krieg of Pendleton, Indiana, a nephew, Brian Krieg, and niece, Julie Baldwin, and Julieâ€™s husband Ron and their children, as well as his motherâ€™s sister, Jeanne Ringer of Lakeville, Indiana, many cousins, and countless loving friends, particularly his college roommate Andy Cirioli, and his wife Carmina, of Connecticut and Deb Wertz, and her husband Dave, of Mishawaka.
With enormous gratitude, Beth wishes to thank Dr. Bilal Ansari and the compassionate staff at Michiana Hematology Oncology as well as Dr Raj Vuppalanchi and Dr Evan Fogel of IU Health University Hospital and the nurses at the Center for Hospice in South Bend and Plymouth. Their medical care and pull-no-punches professionalism was deeply appreciated. There are far too many people to thank individually here, but without the truly heroic efforts of Bethâ€™s sisters, brothers-in-law and Brentâ€™s long-time friends Bob & Karen Messersmith, he could not have spent his last days looking out at his beloved farm. For this and many kindnesses along the way, he can rest eternally in peace.
Memorial donations may be made to:
â€¢ South Bend Civic Theatre, 403 North Main Street, South Bend Indiana, 46601
â€¢ Studebaker National Museum, 201 Chapin Street South Bend Indiana, 46601
â€¢ The Center for Hospice Care, 111 Sunnybrook Court, South Bend Indiana, 46637, or â€¢ a charity of the donorsâ€™ choice.
Following his cremation, a celebration of life will take place later.