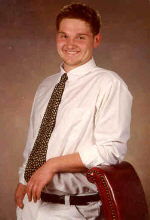 Brian Adam Veger, 18, affectionately dubbed “Hillbilly,” by his many friends, died at 1:46 a.m. on Monday morning, March 10, 2003 , in a car accident in Van Wert , Ohio while enroute back to the University of Northwestern Ohio , Lima , Ohio , where he was a student. Brian had come home from school for the birth of his baby, four-day-old Annamarie Rose Veger, his and fiancee Christina M. Smith’s daughter. Brian was born in Plymouth on August 3, 1984, the son of Dan and Elizabeth Veger Stone. A graduate of LaVille High School, class of 2002, he was a freshman in Auto Technicianï¿½s school in Lima, Ohio. A member of Ducks Unlimited, he enjoyed deer hunting, fishing, and farming. He loved cars and tractor pulls. At LaVille, he was certified in Machine Metals, Glass and Windshield Repair. He was treasurer of the Future Farmers of America while in high school. Brian is survived by his parents, Elizabeth and Dan Stone and by Christina Smith, his fiancee and their baby daughter, Annamarie, all of Plymouth. Two brothers, Danny C. and Josh D. Stone, both of Plymouth, survive as well as his paternal grandmother, JoAnn Fuchs, LaPaz, Ind., and maternal grandmother, Judy Veger and maternal great-grandmother, both of Plymouth. Several aunts and uncles also survive his death. Brian was preceded in death by his great-grandparents, John and Mary Veger, a great grandfather, Carl Emmons and two grandfathers, Joseph Veger, Sr., and Richard Stone. Visitation with his family will be from 3 to 8 p.m. on Wednesday, March 12, 2003 , in the Johnson-Danielson Funeral Home, 1100 N. Michigan St. , Plymouth . Funeral services, officiated by the Rev. Charles Krieg, pastor of the Salem United Methodist Church, Bremen , will be at 2 p.m. on Thursday, March 13, 2003. Burial will be in Fair Cemetery , North Liberty , Indiana In memory of Brian, a trust for his baby daughter, Annamarie, has been established.