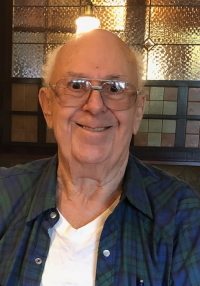 Bruce Walton, 82, of Argos, IN passed away on October 04, 2019. Bruce was born in South Bend, IN on July 26, 1937 to Roy and Francis Walton.
On February 13, 1960 he married Carol Walton. He was an iron worker in the automotive industry and also had a side business of reloading ammunition. One of Bruceâ€™s greatest joys was grandchildren and great-grandchildren. Surviving are his daughter, Frances L. (Philip Luzadder) Hylton of Argos, granddaughter; Amanda (J.J.) Navarro of Edinburgh, Texas and her children; Jose, Christal, Carly, and Benjamin; a grandson; Kenny (Brittany) Hylton of Knox, IN and sons Devin and Jayden. He was preceded in death by his parents and his wife of 50 years, Carol A. Walton.
A committal service will take place on Tuesday October 15, 2019 at 3:00 p.m. at the chapel at New Oak Hill Cemetery, 1300 Chester Street Plymouth, IN 46563. Service arrangements are under the direction of Johnson-Danielson Funeral Home, Plymouth.
In lieu of flowers contributions in Bruceâ€™s memory may be offered to the funeral home.