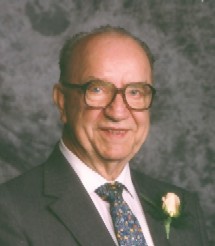 Bruno D. Skever 93, of W. 3rd Road, Plymouth, formerly of Chicago, Illinois, died December 4, 2007 in Saint Joseph Regional Medical Center, Plymouth, Indiana.
The son of Peter and Adele Skever, Bruno was born September 18, 1914 in Chicago, Illinois.
Bruno was married to Juanita, whom preceded him in death. After graduating high school he proudly served in the United States Army and went on to retire as a machinist. His favorite pastime was ball-room dancing.
Bruno is survived by a son-in-law, Arthur Bikneris of Plymouth; four grandchildren and their families, Melanie & Steven Dove with children Dalton, Austin, and Lauren of Plymouth; Lori & Tony Faucett with children Anthony and Kyle of Etna Green, IN; Jim & Brooke Bikneris with children Olivia, Ava, and Amelia of SouthSide, AL; Dave Bikneris with fiancé Jennifer Stough of Plymouth; and a sister-in-law Violet Vaitis of Chicago, Illinois.
He was preceded in death by his wife, parents, daughter, Joyce Bikneris, sister, Ona Skever, and brother, Pete Skever.
A time of remembrance and sharing with the family will be held Saturday December 8, 2007 from 3:30 pm to 5:30 pm in the Johnson-Danielson Funeral Home. A Funeral service will follow immediately at 5:30 pm. Pastor Barry Faucett of New Hope Wesleyan Church, Columbia City, will officiate.
Burial will take place at a later date in St. Casimir Lithuanian Cemetery, Chicago, Illinois.
Memorial contributions may be made to the charity of the donor’s choice.