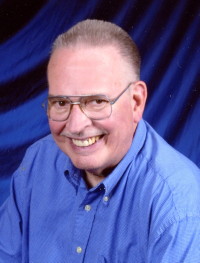 Bryan Emond, 78, of Webster Avenue in Plymouth, passed away Monday, June 24, 2019, with his loving wife of over 53 years by his side. Bryan was born in Plymouth, Indiana to Elmer and Jane Emond on May 5th, 1941. He attended Plymouth Schools, graduating in 1959 from Plymouth High School. Shortly thereafter, Bryan enlisted in the U.S. Navy. After his Honorable Discharge, Bryan began his career as a produce manager with G&G Grocery in Plymouth. He was a produce manager for the next five decades at grocery stores including: Daveâ€™s Supermarket, Family Fare, Van Camps and Martinâ€™s Super Market. He retired on May 26, 2012 from Martinâ€™s Super Market in Nappanee.
While working, Bryan was introduced to Elese Stewart, with whom he fell in love. Bryan took Elese to be his bride on October 10, 1965 with Rev. Samuel Pritchard officiating at the EUB Church in Bourbon. From that union came two sons, Bradley and James. Bryan was a loving and guiding father that had a deep talent with wood crafting, hand making birdhouses, Christmas trees and assorted decorations. He was a lifetime member of Trinity United Methodist Church, and a member of Phi Delta Kappa in the Delta Nu Chapter in Plymouth and the American Legion Post #27.
He was the self-elected Neighborhood Welcoming Committee; always waving from his front porch or yard, often sharing beverages with his new friends at his bonfires and making chili to serve everyone on Halloween. Bryan spent his time volunteering as a fireman and E.M.T. He spent 49 years on the Plymouth Fire Department and was a member of the Indiana Volunteer Firemanâ€™s Association. He was the Director of the Emergency Medical System and had served on the Plymouth City Council from 1995 until 1999. Those left to mourn his passing are his wife Elese; his son, Brad (Nancy-Paige) Emond of Murrells Inlet, SC and son, Jim (Tracy) Emond and their children Jackie, Jon, Jordan, and Jeremiah all of Charleston, SC; sister, Nancy (Pat) Hoeffer of Argos and brother, David Emond of Bremen; many other family members and friends as well as the community as whole, will miss Bryan. Preceded in death by his parents, Elmer and Jane Emond; his sister, Kay Emond; and his mother-in-law, Lois Stewart.
Family will receive friends on Saturday, June 29, 2019, from 11:00-3 p.m. in the Johnson-Danielson Funeral Home, 1100 N. Michigan Street, Plymouth. A Firefighterâ€™s Memorial provided by the Indiana Volunteer Firemanâ€™s Association will begin at 3 p.m. in the funeral home, with Funeral Services following with Rev. Charles Krieg officiating. Military Honors will be provided by members of the American Legion Post 27, Veterans of Foreign War- Marshall County Post 1162 and Disabled American Veteran Chapter 42 after the service.
In lieu of flowers, memorials may be directed to Trinity United Methodist Church 425 S. Michigan St, Plymouth, IN 46563 or Heartland Hospice 230 W. Catalpa Drive, Suite D Mishawaka, IN 46545-8322.