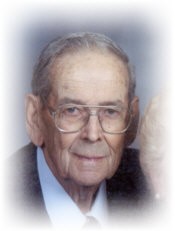 DeWayne G. “Bud” Brown, 83, a lifetime Marshall county resident living at 15590 12th Road, Plymouth, died suddenly of natural causes at 11:30 a.m. in Methodist Hospital, Indianapolis, on Tuesday, October 5, 2004.
Born in Bourbon, Ind., on November 30, 1920, Bud was the son of Clifford Carl and Ada Mae Dillingham Brown. He was a 1938 graduate of LaPaz High School.
He served in the United States Army during W.W. II as a surgical technician. He was stationed in New Guinea and the Southern Philippines from 1942 to 1946.
On January 31, 1947, in Bremen, Ind., Bud and Elizabeth M. Marsh were married.
After Bud and Liz were married, he worked as a USDA inspector for Schlosser’s Hawthorne Melody Dairy Products for 28 years, from 1946 to 1973, later working for Berkey’s Auto Parts. He was also a devoted caretaker of the Kiwanis Twin Lakes Children’s Camp from 1946 to 2000, always doing something.
In October of 1998, Bud was honored at a surprise dinner given by the alumni of the Kiwanis Twin Lakes Camp for Handicapped Children.
Wayne Gablin, co-director of the alumni camp, said that “without volunteers such as Bud Brown to help us, we could never have had this camp.”
In addition to fixing anything with bailing twine and duct tape, Bud was a surrogate father and confidant to the children and counselors alike.
He doctored sick turtles and wiped away children’s homesick tears. With his barn of spare parts, Bud had resources for every thing from a wobbly wheel chair to crumbling crutches.
Spare parts were something Bud knew about. He had undergone a kidney replacement, had an ankle pinned, a heart bypass, two cataract surgeries and, at 31 years, was one of the longest living kidney transplant survivors on record and one of the first in Indiana to have had home dialysis treatments. Bud had received his kidney from his brother, Carl “Bill” in a pioneer surgery.
He had a wonderful sense of humor that never was dimmed. Bud loved his grandkids, liked to fish in Wisconsin and Minnesota. He and Elizabeth enjoyed Florida, making many trips over the last 14 years to the North Ft. Myers area.
A member of the First United Church of Christ, Bud was also a member of the V.F.W. Post 1162 and the Kidney Foundation.
He is survived by Elizabeth, his devoted wife of over 57 years, and by their daughter, Susan M., and her husband, Dr. Dan Kubley, Roanoke Rapids, North Carolina, and their son, Robert D., and his wife Bev, Brown of Plymouth.
Eight grandchildren also survive, they are: A.J. Kubley, Tom and spouse Cindy Kubley, Mary Kubley, Anne McClelland, Teresa Brown, Elizabeth Brown, Michael Orlowski and Carrie Orlowski. Two sisters and a sister-in-law include Jeruldene Miller, Plymouth, Ind.; Betty Fairchild, Elkhart, Ind.; and Gwen Brown, Kokomo, Ind. along with numerous nieces and nephews.
Bud was preceded in death by his parents and a sister, Jean Everdon and two brothers, Kenneth and Carl “Bill”.
Friends are invited to celebrate Bud’s life and service on Thursday, October 7, 2004, from 4 to 8 p.m. in the Johnson-Danielson Funeral Home, 1100 N. Michigan St., Plymouth, and at the First United Church of Christ, 312 N. Center St., Plymouth, on Friday, October 8, 2004 from 11 a.m. to 1 p.m..
Funeral services for Bud, officiated by the Rev. John M. Gantt, will be held in the Church at 1:00 p.m. on Friday, October 8, 2004.
Burial will be in New Oakhill Cemetery, Plymouth where military services will be accorded him by Veterans of Foreign Wars, Marshall County Post 1162.
Memorial gifts in Bud’s memory may be made to the Kidney Foundation or the First United Church of Christ, or the Kiwanis Children’s Camp