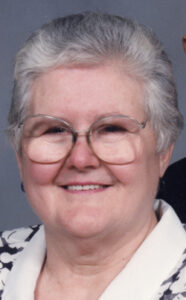 Burl Irene Flagg, 87, an Argos resident for fifty-six years and a Plymouth resident since 2004, passed away Saturday, June 2, 2018 in the Millerâ€™s Merry Manor, Plymouth.
She was born January 23, 1931 in Plymouth, to the late A. Roscoe and Dora O. (Zumbaugh) Sarber.
She married Albert O. Flagg January 16, 1948 in Plymouth; he preceded her in death July 13, 2004. Burl decided in 1965 to go back to school and get her high school diploma; she graduated with an A+ average from a Correspondent School.
She loved taking care of children and was a child care home provider for twenty-nine years, retiring in 1999. She would attend several different early childhood education seminars to be able to provide the best care to her children she cared for. Burl also attending the First United Methodist Church here in Plymouth. One of her favorite hobbies was crocheting; not only did she enjoy teaching crocheting, but she has many pieces that are shown in many peopleâ€™s homes here in Marshall county.
Surviving are her two children; Gary A. Flagg and wife Margaret, and Cindy I. Flagg all of Plymouth. She is also survived by a grandson; Quentin J. Flagg and wife Sara, of Knox. Also surviving are several nieces and nephews.
Burl was preceded in death by her parents, husband, and two sisters; Violet Ludwig and Marjorie Baker.
Visitation will be held from 11-1 p.m. on Friday, June 8, 2018 in the Johnson-Danielson Funeral Home, 1100 North Michigan Street, Plymouth. Funeral services will follow in the funeral home at 1:00 p.m. with Rev. Scott Carmer officiating. Burial will be at a later date in the Maple Grove Cemetery, Argos. Memorial contributions can be made to the Argos Public Library, 142 North Michigan Street, Argos, Indiana 46501.