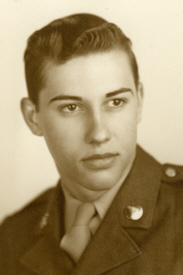 Burton E. Wallace, 91, passed away in his home on Friday morning September 16, 2016 of natural causes.
Burt was born in Plymouth, Indiana on April 2, 1925 to Harry A. and Nellie A. (Dawson) Wallace. He graduated from Argos High School.
After high school, he joined the U.S. Army as a medic during WWII. He was Honorably Discharged in 1946.
He was a farmer all his life, since boyhood and into teaching his children how to farm crops and raise hogs. He worked for Bendix in South Bend as a machinist until his retirement, after which he continued his love for farming.
Burt was a simple man who cared very much about being a good Christian. He was a former member of the Plymouth Church of the Nazarene.
He was the â€œKing of Dominosâ€ and loved a good game of horseshoes.
Burton is survived by his children: Marsha McPherson of Frankfort, IN, Larry (Shiela) Wallace of Burlison, TN, Dana (Cheryl) Wallace of Ft. Wayne, IN and Rebecca Haining of LaPaz, IN; 26 grandchildren and 20 great-grandchildren; and siblings: Linda Sheets, Juanita Stapan, Alvina Florea, Nadine Rice, and DeVere Wallace.
He was preceded in death by his parents and siblings: Derl, Merlin, Clayton Wallace and Roena Yazel.
Visitation will be held Wednesday, September 21, 2016 from 5-7 PM in the Johnson-Danielson Funeral Home, 1100 N. Michigan Street, Plymouth. Funeral services will be held at 11 AM on Thursday, September 22, 2016 in the funeral home. Visitation will resume one hour prior to the start of the service.
Burial will be in the New Oak Hill Cemetery with Military Honors provided by members of the American Legion Post 27, Veterans of Foreign War- Marshall County Post 1162 and Disabled American Veteran Chapter 42.
Memorial contributions can be sent to the Wallace Family Scholarship c/o Indiana Wesleyan University 4201 S Washington St, Marion, IN 46953.