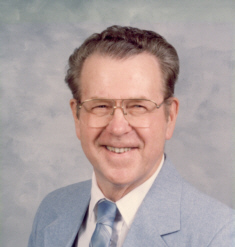 Burton J. “Burt” Feece, 92, passed away in his home on Sunday, May 22, 2011 at 12:45 p.m. Burt has resided at his South Michigan Road home in Plymouth since 1968. He will be remembered for his Christian values and the successful auto body repair business that bears his name yet today. He founded Burt’s Body Shop in 1956 with a reputation built on integrity. At his retirement in 1984 he had achieved the distinction of the oldest body shop in Marshall County.
Burt was born in the Culver area on July 28, 1918, the son of Ezra and Cora M. (Ransbottom) Feece Sr. He resided most of his life in Marshall County and graduated from Culver High School in the Class of 1936 where he was involved in theatre and music.
As a young man in the late 1930’s, his interest in cars led him to a position with Gates Chevrolet in Plymouth and South Bend in auto body repair and then as service manager prior to setting off on his own.
Burt took as his bride the former Margaret E. Overmyer on September 14, 1940 in Burr Oak. Following her death on May 28, 1988 he married Ineva V. Douglas who would also precede him in death on March 28, 2007.
On August 24, 1943 he entered active duty during WWII in the U.S. Navy until January 4, 1946. He holds membership in the Plymouth American Legion Post 27.
He returned home to serve the Lord as a member of the Burr Oak Church of God and held many positions including Elder and Sunday School teacher. More recently he has attended the Plymouth Wesleyan Church and the Jamestown Baptist Church in Waycross, Georgia where he spent many winters with his wife, Ineva.
Burt was faithful to Masonry, as he entered the Plymouth Kilwinning Lodge No. 149 on February 25, 1960 and received his 50 year service pin on March 4, 2010. He was a proud Life Member of the Ancient Accepted Scottish Rite – Valley of South Bend in which he attained the 32nd Degree and served many years as District Membership Chairman.
He was a past member of the Plymouth Lions Club. Burt enjoyed fishing, vegetable gardening and woodworking. In 2001 he authored the book; The Life and Times of Burt Feece.
Burt is survived by two sons and their families. Terry L. Feece of Plymouth and his children: Christopher (Jennifer) Feece, Todd Feece and Michelle Feece. Douglas J. (Suzanne) Feece of Plymouth and their children: Denise Feece, Jason (Tennille) Feece and Amanda (Ryan) Gray. Six great grandchildren also survive as well as his sister; Gertrude Elliott of Ft. Wayne and one sister-in-law; Lexie Feece.
Burt’s extended family includes: step-daughter, Pat E. (Lawton) Taylor, two step-sons, Keith P. (Gloria) Douglas and Timothy (Angel) Douglas all of Waycross, Georgia survive with many grand and great-grandchildren.
In addition to Burt’s parents and spouses, preceding in death were infant son; Brent A. Feece, infant daughter; Denise D. Feece and brothers; Ted C., William R., Robert L., Ezra Jr and Lester A. Feece. Visitation for Burt will be held on Friday, May 27, 2011 from 4 – 8 p.m. in the Johnson-Danielson Funeral Home, 1100 N. Michigan St. Plymouth where Masonic Rites will take place at 7:30 p.m. Funeral services will be conducted Saturday, May 28th at 11 a.m. in the funeral home with the Revs. John Branch and Ed Friberg officiating. Burial will follow services in the Oakhill Cemetery with Military Honors provided by members of the Plymouth American Legion Post 27, V.F.W., D.A.V. and South Bend Honor Guard.
The family wishes to express their thanks to the many supportive acts and hours given by hospice volunteers and request memorial gifts be given to the Center for Hospice Care, 112 S. Center St., Plymouth, IN 46563 to ensure the same care for others.