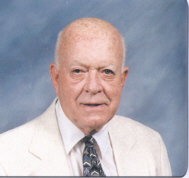 C. Herman “Herm” Mattix, 83, 200 Ewing St., a longtime, popular Plymouth resident has died.
Herm, living in Plymouth since 1924, died of natural causes at 9:50 p.m. on Monday, December 27, 2004, in the Saint Joseph Regional Medical Center, Plymouth.
He was born in Larwill, Ind., on February 21, 1921, the son of Charles E. and Elma E. Decker Mattix. He graduated from Lincoln High School with the class of 1939 and attended IUSB for two years.
Herm served in the United States Army in World War II. He was a sergeant in the Army Medical Corps in New Guinea and in Manila and the Philippines.
For all of his life, he only worked for one company –Montgomery Ward — for 42 years, starting as a stock boy in the Plymouth store while a junior in high school, until his retirement in 1982 as the Manager of the Auto Center at the Scottsdale Mall location in South Bend.
Herm always said that when he started, he “knew as much about automobiles and engines as a hog knows about Sunday.”
“I never had any training. I just picked it up.” In all that time, he never missed a day’s work until an accident in 1980 sidelined him for a few weeks.
He even got his wife from Montgomery Ward. “Not from a catalog,” he would joke. They met at the store. She worked in the credit department. On May 5, 1947, in Rochester, Ind., Herm and Florence E. Singleton were married. Florence died on February 26, 1996.
He was a past-president of the Scottsdale Kiwanis Club, a member of the Plymouth Masonic Lodge, No. 149, a member of the Eastern Star and served two terms on the Board of Directors for the Marshall Co. Community Foundation. He had a license to fly airplanes and he had owned a Cub and a Cessna, flying shorts hops for 40 years. He kept models of his favorite planes in his attic. Herm loved nature and the outside world. He enjoyed remodeling houses and had also restored a 1961 Studebaker and a 1977 Monte Carlo automobile.
Herm is survived by numerous nieces, nephews, great nieces and nephews including local residents; Glenna D. (Ray) Borggren, Grovertown. A grand niece, Marsha L. (Jeff) Welborn, Bremen, and two grand nephews, both of Plymouth, Kent R. and Sherri B. Borggren and Terry L. and Tammy Borggren.
Preceding in death were his parents, wife, brothers; Floyd, Arthur, Robert, Eugene and sisters; Vera Ludwig, Mary Mattix and Betty Mattix.
Friends and family are invited to celebrate his life and service at the Johnson-Danielson Funeral Home, 1110 N. Michigan St., Plymouth, on Thursday, December 30, 2004 from 3 to 8 p.m. A Masonic memorial ceremony will be held at 7:30 p.m. Funeral services will be held at 10 a.m. on Friday, December 31, 2004, in the funeral home. The Rev. Dr. Dean Fager, pastor of the First United Methodist Church where Herm was a member, will officiate.
Special graveside services at the New Oakhill Chapel will follow by members of Veterans of Foreign Wars, Marshall County Post 1162. Entombment will be in the New Oakhill Mausoleum.
Memorial gifts may be made to the Marshall County Hospice or to a charity of the donor’s choice.