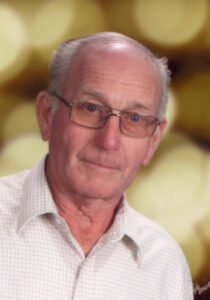 Loren Nifong, 74, passed away unexpectedly on Friday morning, March 30, 2012, at Lutheran Hospital, Fort Wayne, IN.
Born at home on April 13, 1937, Loren was the son of John Cyrus and Loretta (Harley) Nifong.
Loren graduated from West High School in 1955. He was a 10-year 4-H member and had fond memories of showing the family Holsteins regionally and at the Indiana State Fair.
Loren married his lifelong partner, Shirley J. (Johnson) Nifong in Plymouth on April 2, 1961. They were blessed with two children, Lorna (Nifong) Shively and John Nifong.
Widely known for his strong work ethic, he was a full-time livestock and crop farmer. Along with farming, Loren drove bus 50 years for the Plymouth community Schools. He loved the kids and often adopted their problems as his own. Most Saturdays found Loren either hauling kids or livestock.
Loren never knew a stranger and will be long remembered for his honesty and generosity toward others.
A man of many talents, Loren served as song leader at the Union Church of the Brethren. He was a man of strong faith who enjoyed simple things: good conversation, laughter, crops growing and calves playing.
Loren loved his children and grandchildren unconditionally. He enjoyed watching John drag race, Lorna and Taylor show horses and Jennah play basketball. He enjoyed watching the PHS band kids and was an avid boys and girls basketball fan.
He is survived by his wife, Shirley and their daughter, Lorna and son John and daughter- in-law, Kim.
His grandchildren are: Johnathan A. Nifong, Taylor Loren Shively and Jennah Diane Nifong. A great-grandson, Holten Michael Nifong survives as well.
Three brothers also survive: Larry, Ron and Ross Nifong. He was preceded in death by his parents and two nieces.
Friends are invited to share memories with his family on Tuesday, April 3, 2012, from 3 – 8 p.m. in the Johnson-Danielson Funeral Home, 1100 N. Michigan Street, Plymouth.
Funeral services for Loren will be held on Wednesday, April 4, 2012, at 11 a.m. in the Union Church of the Brethren, 10483 State Road 17, Plymouth where visitation will continue one hour prior to services. Revs. Sam Han and Brandon Schadek will officiate.
Burial will follow at New Oakhill Cemetery, Plymouth.
Memorial gifts in Loren’s memory may be made to the Church or 4H Horse & Pony Program, 114 W. Jefferson St., Plymouth, IN 46563