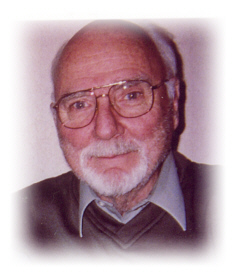 A combined memorial service for Dick and his wife Margaret will be held at 2 p.m. Sunday, October 23rd in the funeral home. The family will receive friends from noon until 2 p.m. Burial will follow in the New Oakhill Cemetery, Plymouth.
Cecil Richard “Dick” Hayden, 84, a resident of Plymouth since August, 1967, died after a brief battle with cancer on Friday, August 19, 2011, at 3:10 p.m. in Pilgrim Manor, Plymouth. Known as both C.R. and Dick, he was born in Lowell, Indiana on December 29, 1926, the son of Fred V. and Marian J. (Nelson) Hayden.
An active athlete in many sports, primarily football, he graduated from Lowell District High School with the class of 1944. Shortly afterwards, he enlisted in the Army Air Corps and served for two years receiving an Honorable Discharge in 1947.
Dick and Margaret G. Sirois were married at her home in Shelby, Ind.on June 6, 1948. Dick went to both Purdue, where he played football and Ball State University to get a teaching degree.
Dick was a consummate salesman. For years, he made a career traveling over Northern Indiana and Illinois, mapping his journey from Standard Oil filling station to filling station. He was friends with all of the operators and farmers in his territory.
Dick’s employment kept the family moving regularly with stops in Marion, Ft. Wayne, Gas City, Indiana and Morton, Illinois before settling for good in Plymouth in 1967.
After retiring from Standard Oil he worked as a national accounts manager for Young Door in Plymouth, moving to a home on South Michigan St. His activities were varied. He loved to cut wood and spent countless hours improving his farm property on Muckshaw Road. He played a lot of golf in his younger years. He collected all kinds of memorabilia and enjoyed attending farm auctions. He was an avid animal lover. The Hayden House was never without a dog or a cat.
He and Margaret attended high school reunion meetings in Lake County. He kept in constant contact over the years with his fellow classmates with phone calls and hand written letters. He was a member of the Masonic Lodge in Plymouth and helped to found the Optimist Club, the Toastmasters Club and the Plymouth Junior Football League. As a resident of Gas City, IN, in the early 1960’s C.R. helped to establish the first community youth basketball program. In 1973 Dick was instrumental in forming the Big Blue Booster Club at Greensburg High School in southeastern Indiana. His son Kimbel was a long time high school coach and current teacher in Greensburg. Plymouth’s Big Red Boosters were the template for the Greensburg Community.
He was a member of the Retired Teachers of Indiana. He enjoyed golf, but mostly, he was devoted to his wife and their three sons.
He is survived by Margaret, his wife of 63 years and by their sons: Richard
Kimbel (Connie) of Greensburg, Ind., Timothy Michael (Nancy) of Plymouth, and Marc V. (Diane) of Plymouth.
They have seven grandchildren: Kim’s children are Brandon and Patrick with Great-Grandsons Austin, Arison, Andon and Great-Granddaughter Alexandria belonging to Patrick. Michael’s children are Kara Conerty and Kyle Hayden, Indianapolis and Great-Granddaughters Emma and Kate belonging to Kyle and Great-Grandson Evan belonging to Kara, Marc’s three children are Danielle, Zachary and Vincent Hayden.
Dick was preceded in death by his parents and a brother, F. Reid Hayden.
Memorial gifts may be given to the Center for Hospice Care, 112 S. Center St., Plymouth, IN 46563