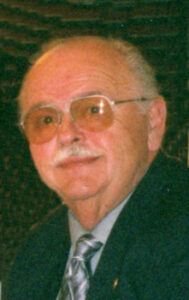 Carl Butgereit, 77, of W. Grant Street, Bremen, passed away there on Friday November 6th at 6:10 a.m. following an illness.
He was born Hans Carl Butgereit on August 5, 1938 in St. Charles, IL the son of Johan and Emmy (Galvanz) Butgereit. They emigrated from Germany while Carl’s mother was expecting.
Carl graduated in 1956 from Whitewater High School in Wisconsin and in December of that year he joined the U. S. Air Force.
He then graduated from the Indiana College of Mortuary Science, Indianapolis and following his internship there he took a position with the Hoover-Miner Funeral Home in Wabash in 1964. He worked many years for the Mishler family in Bremen, served the community of Churubusco and then assisted at Johnson-Danielson Funeral Home in Plymouth. Following his retirement he also delivered for the Aurora Casket Co. warehouse in Bremen.
Carl took pride of his career in funeral service with his greatest desire in providing families with respectful care during a difficult time while never losing sight of the Golden Rule of service to others. Carl enjoyed visiting, telling stories and always remained in good humor.
Carl held longtime memberships in the Wabash Moose, Elks, Shriner and Masonic Lodges. When not at work he would enjoy fishing, Notre Dame and Indianapolis Colts football.
On October 25, 1981 in the Bremen Salem United Methodist Church he took Carol S. Berger as his loving wife, she survives along with, sons Kurt (Nancy) Butgereit of Wabash, IN, Gary Hummel of Bremen, son-in-law Tim Kulczar of Bremen as well as 10 grandchildren and 7 great grandchildren. He was preceded by daughters; Lori Kulczar, Kara Brown and a sister Louise Isbell.
Visitation will be held on Tuesday, November 10th from 4 – 6 p.m. in the Johnson-Danielson Funeral Home, 1100 N. Michigan St. Plymouth. Services will begin at 6 p.m. in the funeral home with Rev. Charles Krieg officiating.
Burial will take place in the Bremen Cemetery.
Memorial gifts may be given in Carl’s memory to the American Cancer Society, Shriner’s Children’s Hospital, Leukemia Research Foundation or Center For Hospice Care.