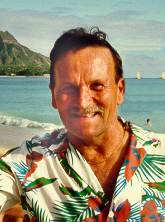 Lifetime Bremen resident and former owner of the Wooden Peel Restaurant, Carl E. “Chuck” Beutel, 71, died of natural causes at his residence on Sunday at 11 a.m. in the company of his daughter and caregiver.
Born in Bremen, Ind., on May 4, 1932, he was the son of German immigrants, Ernest and Marie Beutel and graduated from Madison Township High School in 1950.
He enlisted in the United States Navy on October 19, 1950 and served during the Korean Conflict, he was discharged on August 12, 1954.
On September 21, 1957, in Woodland, Ind., Chuck and Carol L. Klinedinst were married. Carol preceded in death on December 3, 2000.
From 1964 to 1982 Chuck worked for ARMCO Steel of South Bend. In 1982 Chuck and Carol became owner/operators of the Wooden Peel in downtown Bremen and retired in 1998.
Chuck loved animals, tinkering on the family farmstead and was easily pleased with a German Fest of good food and beer.
He was a member of the Bremen Lions Club, American Legion Post 191 and Quail Unlimited of Northern Indiana.
Survivors include his daughter; Kathy Beutel-Galloway and husband Jake, a son Todd E. Beutel and wife Robin all of Bremen. Shannon Bailey, a step granddaughter of Florida and granddaughter, Ashley Beutel of Nappanee and grandson, Joshua Beutel of Bremen survive.
Two sisters; Lydia (Leet) Heise of New Carlisle and Mary Guill of Arlington, Texas along with one brother Herman E. Beutel of South Bend. Numerous nieces and nephews also survive along with Jenny Andrews a special caregiver and longtime family friend Billy Whitehead both of Bremen.
Preceding in death were his parents, wife Carol, a twin brother Fritz Beutel and a sister Martha Harrison.
Family and friends are invited to a Service of Remembrance to celebrate Chuck’s life on Thursday, October 2, 2003 at 1:30 p.m. in the Salem United Methodist Church, 302 W. Plymouth St. Bremen, the Rev. Charles Krieg will officiate. A gathering will follow services and a wake will be announced at a later date.
Chocolates are the family’s preferred expression of sympathy or memorial gifts may be made to Northern Indiana Quail Unlimited, P.O.Box 465, Bremen, IN 46506 or Marshall County Humane Society, P.O. Box 22, Plymouth, IN 46563.