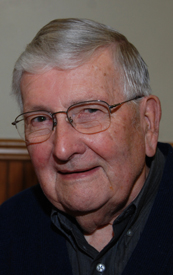 Carl Junior Magnuson, 89, died at 2:40 a.m. Thursday at Grace Village, Winona Lake, Indiana.
Carl was born December 27, 1927, at home, in Darlow, Kansas to the late Carl S. and Hattie B. (Nelson) Magnuson.
He attended Jimtown and Mishawaka High Schools and graduated from LaPaz High School in the Class of 1945. He also graduated from the South Bend College of Commerce in accounting.
While employed at Bendix Products division he met Laura Mae Clark from Galien, Michigan. They married on June 24th, 1950 and had six daughters. Carolyn (Marshall) Fry of Defiance, OH, Cindy (Art) Bushen of Warsaw, Peggy (Jeff) Riffle of Charlotte, MI, Patricia (Gordon) Gilbert of Plymouth, Carla (Dennis) Waddill of Winona, TX, and Cheryl (Jesse) DeBoest of Warsaw. He is also survived by fifteen grandchildren, and 11 great grandchildren. Laura passed away on April 26th, 2000.
On January 6, 2001, Carl married Mary Hobson in LaPaz, IN, who survives him along with two step-children to Carl, Janet (Robert) Covill of Battle Creek, MI and Jon (Jackie) Hobson of Queen Valley, AZ. He is also survived by six step-grandchildren, 14 step-great grandchildren and one step great-great grandchild. Also surviving are three brothers and one sister, John (Mary) Magnuson of Sebring, FL, Ivan (Shirley) Magnuson of Plymouth, Ralph (Treva) Magnuson of Sebring, FL and Cleo (Bob) Shidler of LaPaz along with many nieces and nephews. He was preceded in death by his parents and a brother, Norman Dale Magnuson and two sisters, Wanda Lemert and Alta Kime.
Carl served in the U.S. Navy during WWII and was employed as a cost accountant at Bendix, now Honeywell, for almost 40 years. He served ten years on the Union-North Building Corporation, Board of Trustees and sixteen years on the Union North Board of School Trustees.
He was a hobby farmer, woodworker, collector of toy cars. He recently indulged in painting, Wii game bowling and embraced technology while researching his family tree on his computer.
A member of Calvary Baptist Church in LaPaz, he served as a Deacon, Trustee, Treasurer and Sunday School Teacher.
Visitation will be held on Friday September 1st from 5 â€“ 7 p.m. in the Calvary Baptist Church, 330 Cortland St., LaPaz. Funeral services will be held at the church on Saturday, September 2nd at 11 a.m. with calling one hour prior to services. Pastor Nathan Rettinger assisted by Steve Partridge will officiate.
In lieu of flowers memorial may be made to the Calvary Baptist Church or Grace Village Art Dept. 337 Grace Village Dr., Winona Lake, IN 46590.
Burial will follow in the New Oak Hill Cemetery, Plymouth with military honors provided by members of the Plymouth American Legion Post 27, Veterans of Foreign Wars â€“ Marshall County Post 1162 and the D.A.V.