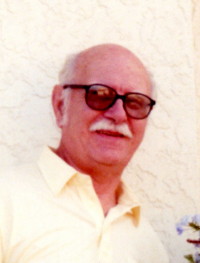 Carl Theodore Lovig, 92, of Plymouth, passed away Tuesday, July 9th, 2019 with his loving family by his side. Carl was born on October 7, 1926, to Lars and Elizabeth (Donnelly) Lovig in Chicago, Illinois. Carl was a proud Union Carpenter, spending over 24 years working on the constantly updated Harris Bank Building on Monroe Street in Chicago. Carl took pride in his high-end custom carpentry work. He especially loved to make cradles and hope chests for his family members. He had a talent for creating clocks, specifically Grandfather Clocks. He found his heart and soul in Mary Lee Lovig whom he took as his bride on December 6th, 1986 in Plymouth, IN. Between them they were blessed with 12 children, 33 grandchildren, 42 great-grandchildren, and 1 great-great grandchild. Carl was a very loving and kind father, who was artist and talented in all of his passions. He spent favored time in his garden where he produced vegetables. He enjoyed photography but his family brought him the most happiness. He was a member of Trinity Methodist Church in Plymouth, IN.
Those that survive him are his wife Mary Lee Lovig; children and families: son, William Lovig and his children, Jason (Erin) Lovig and Matt (Lauren) Lovig and grandchildren, Kaylee, Karter and Willow; son, James Lovig and his children, Nicholas Lovig and Samantha Lovig and grandchildren, Chase and Vinny; son, Daniel (Lorraine) Lovig and their children, Julia Lovig and Greg (Kelsey) Lovig; daughter, Pam Marie Lovig; son, Terry (Cori) McMillen and their children, Brian (Melissa) McMillen, Cameron McMillen, Andy (Jessica Czajkowski) McMillen and granddaughter, Adalyn; daughter, Cynthia (Lincoln Meinzen) King and their children, Robert Keb Jr., Jamie Patterson, Joseph Keb, Joshua King and Benjamin King and their grandchildren: Kerrissa, Jordan, Justice, Kilee, Dakota, Tegan, Drake, Jocelyn, Dana, Tyler, Delia and Cole and great-granddaughter, Meliyah; daughter, April (Larry) Jefferies and their children, Kimberly (Will) Hurst and Daniel (Lauren) Jefferies and grandchildren: Scott, Ella, Caleb, Abby and Andrew; daughter, Christine (Charles) Cleveland and children, Deanna Cleveland, Lisa Meneely, Emily (Donny) Fishburn and Tony (Kelsey) Cleveland and grandchildren: Triniti, Brayden, Zagan, Max, Kiara, Lucas, Kaedra and Ryker; son, Warner John (Bonnie) McMillen Sr. and their children, Warner John (Nikki) Jr. and Jessica Marie Ann McMillen and grandchildren: KaraEve, Emma, Owen, Ayden and Aniya; son, Kurt McMillen and his children, Janelle (Stan) Pardee, Jennifer (Ken) Hendricks and Heather McDowell and his grandchildren: Liam, Joel, Georgia, Shawn, Thomas and Jack; son, Rick McMillen and his children, Brittany Tremaine, Seth Garrison, Haylie McMillen, Niko McMillen and Caden Jackson; and son, Randy McMillen and his children, Tristen, Austen and Ashlen McMillen; many other family members and friends will also treasure the memory of Carl.
He is preceded in death by his parents, Lars and Elizabeth his first wife Millie Lovig, and his grandson Jason McMillen. In lieu of flowers memorials may be directed to American Legion Post #27 1040 East Jefferson Street, Plymouth, IN 46563 in Carlâ€™s name. The family will receive friends on Thursday, July 11th from 4-7 pm in the Johnson-Danielson Funeral Home, 1100 N. Michigan St., Plymouth, Indiana. Visitation will continue on Friday, July 12th from 12:00 noon until the hour of service at 1:00 p.m. in the funeral home, presided by Pastor Jeff Stueve. Interment will be in the New Oak Hill Cemetery, Plymouth with Military Honors provided by members of the American Legion Post 27, Veterans of Foreign War- Marshall County Post 1162 and Disabled American Veteran Chapter 42.