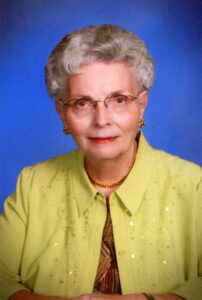 Carol was a three pound baby born at home in Tyner, Indiana to Harry E. Karn and Tessie (Klingerman) Karn.  The doctor did not expect her to live, so her birth was not immediately recorded.  Due to Carol’s strong constitution and her parents care, they proved the doctor wrong.

Her family was in the truck farming business.  She told stories about putting a sandwich in her pocket and going to the field to work and about selling melons and tomatoes door to door in Tyner and Plymouth.  Later Carol would often drive Dr. Thompson at night for home visits.

She graduated in 1948 from Tyner High School where she played the saxophone. Until recently she often met with classmates for lunch.  On August 22, 1948 she married Paul E. McBride at Pine Creek Church of the Brethren with Reverend Gertis officiating.  Paul became a pastor in the Church of the Brethren several years into their marriage.  Many of their travels included trips to the church’s annual conferences.  Paul preceded her in death on December 27, 2009.  They shared 61 years of marriage.

When Carol and Paul were first married she worked at Hummer Hardware in Lakeville.  While raising a family, Carol was a cook in the Tyner School cafeteria and also catered several alumni dinners.  She cooked for employees at Price’s Abattoir as well.  Carol worked in the Marshall County Assessor’s office and the former Marshall County Bank.  She also volunteered at Love Incorporated and was on the cabinet of the Northern Indiana District Women’s Fellowship for the Church of the Brethren.

While Carol loved cooking, she also enjoyed cake decorating, making specialty cakes for family and friends.  Carol enjoyed many crafts and was very creative.  She particularly enjoyed decorating for the holidays inside and out, with Christmas being her favorite.  Carol and Paul enjoyed gardening and sharing the fruits of their labors with the community.

Carol and Paul built a home in Tyner and lived there until 1993.  During those years they raised their family, and took care of her parents on a daily basis as family was very important to her and she would drop what she was doing if needed.  She and Paul then built a house in Plymouth and enjoyed many years of retirement there.

Due to current virus restrictions, there will be no on-site visitation.  Family services will be held at Johnson-Danielson Funeral Home, 1100 N. Michigan St., Plymouth, Indiana 46563, on Tuesday January 12, 2021 at 2pm. with Pastor Tom Anders officiating.  Service will be streamed live on ZOOM, and will begin at 1:45pm.  Please contact Johnson-Danielson web site for the ZOOM link.  Private burial will take place in the New Oak Hill Cemetery.

Contributions in memory of Carol may be made to the Plymouth Church of the Brethren, 1130 N. Michigan St., Plymouth, Indiana or to the Entertainment Fund at Pilgrim Manor, who took great care of Carol.  Contributions of Bingo prizes for the residents may be donated for personal hygiene: Deodorant, body wash, lotion, shampoo and men’s and women’s conditioner; Candy (regular and sugar-free); snacks regular and low sodium, word search books (large print), beaded necklaces or bracelets, nail polish, bottled beverages (soda or juice) (diet and regular) and stuffed animals. There will be a box for the Bingo prizes at the Plymouth Church of the Brethren through Tuesday January 12th. 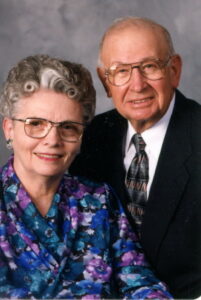