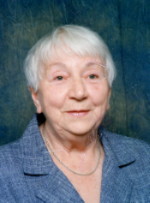 Carole A. Sheets, 83, passed away on Wednesday, October 24, 2018 at Millerâ€™s Merry Manor in Plymouth. A proud survivor of Colon Cancer, Breast Cancer and Stage IV Renal Failure, Carole sadly succumbed to Alzheimerâ€™s Disease after a 10-year battle.
Carole was born in Ft. Wayne, Indiana on November 13, 1934 to Elmer L. and Cleo (Treu) Ormiston. She married Lowell R. Sheets on May 25, 1954. He would precede her in death on January 2, 1982.
Those left to cherish Caroleâ€™s memory are her two daughters, Charlene Heminger of Plymouth and Reland Sheets of Plymouth; grandchildren, Mandy Heminger of Middlebury and Jesse Heminger of Lakeville; three great-grandchildren and her beloved Weimaraner, Cooper.
Carole took pride in being a homemaker and enjoyed cooking, baking and canning. She was an accomplished seamstress, tailoring and making clothes for family members and Barbie dolls. She enjoyed all arts and crafts- painting, drawing, knitting and anything creative. Carole was an avid reader of mysteries and a Chicago Cubs Fan.
She always had a dog by her side, from her first dog, Homer, to her last dog, Cooper. She was especially fond of beagles and Weimaraners.
Carole became involved in the Plymouth Swinginâ€™ Gals Softball League in 1972 during its inaugural year and remained active with the league for over two decades. She served many of those years as league secretary and coached several teams. She was instrumental in the integration of the boys to the league, thus transforming the league into the Plymouth Youth Softball.
Carole worked for several cleaning services and her own cleaning business until she was 80.
She was preceded in death by her husband, parents and sisters, Dolly Beber and Charlon Neukam.
A Memorial visitation will be held from 5-7 p.m. on Tuesday October 30, 2018 in the Johnson-Danielson Funeral Home, 1100 N. Michigan Street, Plymouth. Memorial contributions can be made to Center for Hospice Care 112 S. Center St. Plymouth IN 46563.