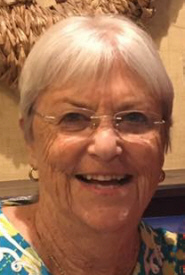 Longtime Pretty Lake resident, Carolyn Paulina McClure, 77, died unexpectedly due to natural causes on Saturday evening in the St. Joseph Regional Medical Center â€“ ER, after becoming ill at her family home.
She was born in Plymouth on April 19, 1940, the daughter of Marshall F. and Lucille (Erwin) Kizer whose family emigrated from Germany and settled in Marshall County in 1848. Carolyn graduated from Plymouthâ€™s Lincoln High School in the Class of 1958.
On St. Patrickâ€™s Day of 1962 she became the bride of Dr. Clark (Mac) McClure and the family made Pretty Lake their home. They shared 41 years together and after retiring split their time with summers in Plymouth and winters in Lauderdale-By-The-Sea. Mac would precede her in death on January 10, 2004. Since 2008 she has enjoyed the company and care of her best friend and significant other Jonathon â€˜Jimâ€™ Hardin.
She loved family gatherings especially on Pretty Lake, pontooning and often crafting needlepoint, cross-stitch and knitted items for her grandchildren and great-grandchildren who were her life treasurers and who will always remember her loving smile.
Carolyn enjoyed sports especially tennis and golf. She helped organize the LPGA Ladies Golf Tournaments at Plymouth Country Club and was herself Club Champion at PCC multiple times. She had also served as its first woman President. She and Jim currently enjoyed member play and socials with many friends at the Pretty Lake Golf Club.
She leaves the families of five children and her sister. They are: Cindy McClure of Portland, OR, Dr. William (Karen) McClure of Bend, OR and their children; Taylor (Camille) McClure of San Jose, CA and Dr. Kelsey McClure (Stephanie Moyerman) of Phoenix, AZ, Jan McDonald, Bend, OR and children; Brook McDonald and Nash McDonald of Portland, OR, Catherine (Peter) Buchanan of Lighthouse Point, FL and their children; Dr. Caitlin (Martin) Ferguson of Granger, IN, (great-grandchildren; Catherine Clare and Nora Kay Ferguson), Allison (Nicholas) Kanelidis, Fort Lauderdale, FL, Courtney Buchanan of Tampa, FL and John Buchanan of Lighthouse Point, FL, and son Steve (Traci) McClure of Fort Lauderdale, FL. and her sister Elizabeth (Robert) Luther Knoxville, TN.
Carolyn was preceded in death by her mother Lucille in 1976, father Marshall in 1988, husband Mac in 2004 and brother John Erwin Kizer in 2012.
A gathering of family and friends to celebrate the life of Carolyn McClure will be held on Saturday, June 3rd, from 4 â€“ 6 p.m. in the Johnson-Danielson Funeral Home, 1100 N. Michigan St., Plymouth, Indiana.
Preferred are memorial gifts to The National Kidney Foundation www.kidney.org or Cancer Association of Marshall County Inc. c/o 9739 Sunnyside Drive, Plymouth, IN 46563