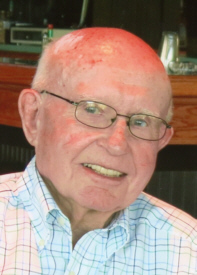 Carroll â€œJerryâ€ Emerson Zartman, 87, of Tyner, passed away suddenly Sunday evening in Memorial Hospital, South Bend. A Faith filled life provides comfort that he is in the arms of his Lord and Savior.
Jerry hailed from Southern Indiana with Paoli as his birthplace on February 9, 1929. He is the son of Walter and Alma (Fort) Zartman. The family had also resided in French Lick and Rock Creek before moving north to Tyner. It was in Tyner schools that he met his one love Shirley June Strang. The two graduated from Tyner High School and became bride and groom in the Tyner United Methodist Church on June 12, 1949 and celebrated 67 years together. In 1954 Jerry joined Shirley as an official member of the Tyner United Methodist Church. Through the years he served as Sunday School Teacher, Usher, Lay Leader, Trustee and played in church league softball.
Following high school in 1947 Jerry became a member of the Independent Order of Oddfellows Tyner Lodge No. 821. One year later he and Shirley became members of the Tyner Rebekah Lodge No. 865 a commitment of service and leadership that has now spanned 68 years. Jerry had served as Noble Grand in 1957 and again in 1979. He helped coordinate the construction of a new lodge building from 1960-62 and from 1970-71, he held the high honor of serving as Grand Master of Indiana.
Jerry furthered his education and attained a certificate from Ball State Teachers College and continued studies at Indiana University â€“ South Bend.
In 1952, Jerry entered military service in the U. S. Army during Korea and was honorable discharged as a Sgt. E6 on September 23, 1953 at Camp Atterbury, Indiana. He was a 50 year member of the Walkerton American Legion Post 189.
Jerry provided the area with quality construction skills as a general contractor for 35 years and retired in 2003. He maintain his property with great pride and enjoyed both vegetable and flower gardening.
He has served the community as a 10 year member of the Polk-Lincoln-Johnson School Board of Trustees and Treasurer of the Tyner Cemetery Board for many years.
Jerry loved being involved and supporting his childrenâ€™s lives and many activities. His dear family includes: his wife Shirley, daughter Susan & Greg Doll of Lawton, MI and children: Alex (Jessica) Doll and Sarah (Ed) Rudell, son Randy & Julie Zartman of Indianapolis and children: Austin and Jackson, daughter Lisa Paczkowski of Brownsburg, IN and children: Hannah and Lucy and son Cary Zartman of Chicago, IL. His four great-grandchildren include: Hudson, Hatcher, Addison and Emerson Grace. Two sisters-in-law also survive; Jane Zartman of Ft. Wayne and Mary Zartman of Rhode Island along with many nieces and nephews.
He was preceded in death by his parents, two brothers Walter â€œZekeâ€ Zartman and Vance Zartman and one sister Eleanor Winrotte.
Visitation for family and friends will be held on Wednesday from 4 â€“ 8 p.m. in the Johnson-Danielson Funeral Home 1100 N. Michigan St., Plymouth where an I.O.O.F. memorial rite will be provided at 7:30 p.m. by members of the Tyner Lodge No. 821 & Rebekah Lodge No. 865.
Visitation will continue after 10 a.m. Thursday in the Tyner United Methodist Church where services will begin at 11 a.m. under the direction of Pastor Dennis Soule. Burial will follow in the Tyner Cemetery with military honors provided by members of the Plymouth American Legion Post 27, Veterans of Foreign Wars â€“ Marshall Co. Post 1162, the D.A.V.
Preferred are memorial gifts to the Tyner United Methodist Church, 4501 French St. Tyner, IN 46572 or Center for Hospice Care, 112 S. Center St., Plymouth, IN 46563.